Edit
The Nameless One
Regular 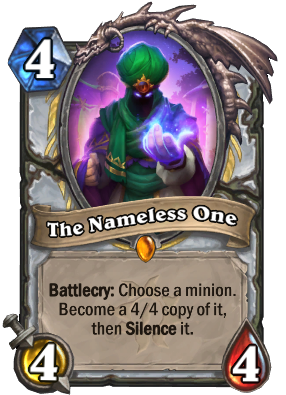 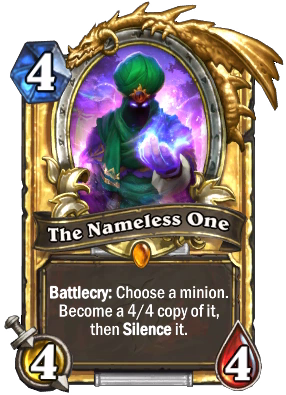 Battlecry: Choose a minion. Become a 4/4 copy of it, then Silence it.
Flavor text

Used to be called " , the Nameless," but everyone got confused.

The Nameless One is a legendary priest minion card, from the Madness at the Darkmoon Faire set.

The Nameless One can be obtained through Madness at the Darkmoon Faire card packs, through crafting, or as an Arena reward.

The Nameless One's Battlecry effect, though unusual, can be potent in the right circumstances. It can be used against a Taunt minion that would prevent lethal on your opponent, huge buffed minions or ones with powerful effects that prove too much of a threat to ignore (eg. a 20/20 Edwin VanCleef, The Lich King, etc.), or even to "steal" said effects (such as with the Lich King, Malygos, Kalecgos, Y'Shaarj, Rage Unbound, etc.).

It can also be used against your own minions in certain cases. Using this on a minion with a downside (like Zombie Chow or Ancient Watcher, for instance) can allow you to bypass said downside for that minion, although remember that, since the Nameless One only silences its target, it will itself have those potentially negative effects.

There is 1 achievement related to The Nameless One.

The Nameless One is unique to Hearthstone.