This article is using {{Card template}}.
See Help:Style guide/Card for how to edit this kind of article.
Edit this article
The Marsh Queen
41368 • UNG_920
Regular 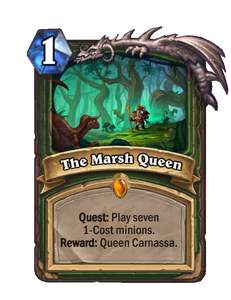 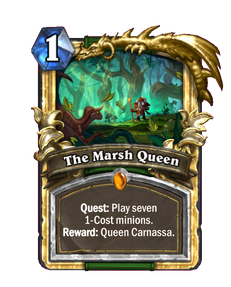 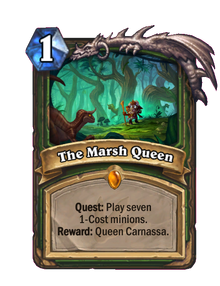 The Marsh Queen is a legendary hunter spell card, from the Journey to Un'Goro set. 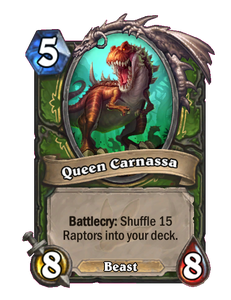 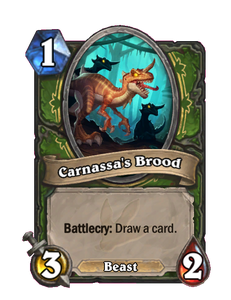 Due to the nature of this quest's progress requirement, The Marsh Queen lends itself to a reckless all-in approach that tries to reap the quest-reward as quickly as possible. If you include nothing but (1)-cost minions in your deck, you can potentially summon Carnassa by turn five. The only problem is that you are limited by the number of cards in your hand. If you go first, you will only draw enough cards to finish the quest by turn five, delaying Carnassa's summoning by one turn. However, it definitely works if you go second.

The summoning of Carnassa and her brood is undeniably powerful, but it is somewhat unreliable. If you summon the queen as quickly as possible, the odds of you drawing one of her raptors are below 50%. You may need to invest some time in card-draw to find the raptors and really get the chain reaction going. Since most of your cards are going to be cheap, heavy card draw like Master's Call, Genzo, the Shark, and Coldlight Oracle may prove useful. Even then the raptor swarm can lose steam against decks with heavy control options and AoE, so card generation effects like Stampede and Infest are good for keeping your options open. Tundra Rhino is a very strong inclusion in the deck for dealing heavy face damage.

Another great card for the deck built for the quest is Dinomancy, because the raptors could be buffed by it, rather than doing 2 damage each turn.

Fire Fly is a very useful tool to finishing this quest, since it provides two minions with only one card. If you draw it, you may be able to summon Carnassa by turn five, even if you go first. Ravencaller and Halazzi, the Lynx are also helpful for quest completion.

For extreme value, Queen Carnassa is one of the most impactful cards you can hit on the same turn with Dire Frenzy. Casting Dire Frenzy on the small raptors adds even more cheap threats to your deck as well. Likewise, Zul'jin can re-cast The Marsh Queen after completion, and the small raptors make completing the second Quest trivial, giving you yet another Carnassa.

The Marsh Queen has interesting combo-potential with Hemet, Jungle Hunter. Build a deck with no (or very few) cards that cost (4) or more, add Hemet, The Marsh Queen, then fill in the rest with (1)-cost minions. If you draw Hemet in a match, wait with playing Queen Carnassa until you have played Hemet. This will remove your deck from the game and replace it with an all-raptor deck that can quickly overwhelm your opponent. The downside is that Hemet will be stuck in your hand once you have already summoned your quest reward. Do not play him if the raptors have already been deployed. You will be left with an empty deck, an empty hand, and fatigue-damage.

The devilsaur Queen Carnassa and her raptor brood are unique to Hearthstone.