This article is using {{Card template}}.
See Help:Style guide/Card for how to edit this kind of article.
Edit this article
The Lurker Below
57619 • BT_230
Regular 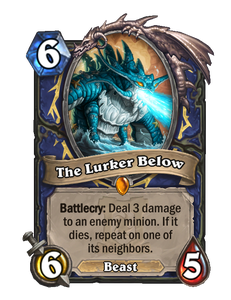 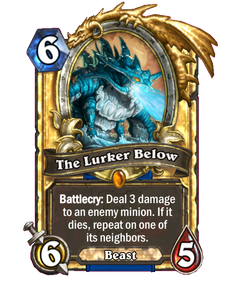 Dimensions: Full • 330 x 410px
Elite
Battlecry: Deal 3 damage to an enemy minion. If it dies, repeat on one of its neighbors.
Flavor text

"Throw it back! THROW IT BACK!" 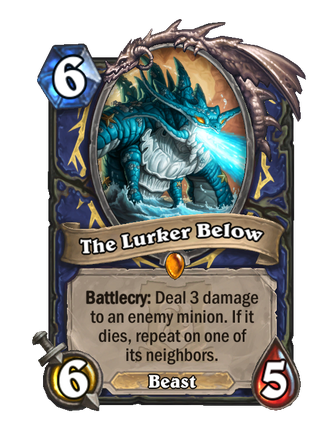 The Lurker Below is a legendary shaman minion card, from the Ashes of Outland set.

The Lurker Below is nearly identical to

Fire Elemental, trading the ability to deal face damage for potential to hit more enemy minions. It can provide a full clear against smaller boards like Treant Druid or Galakrond Warlock, and can be used alongside

Lurker Below works as a good finisher for other board clears. It can often clean up anything left behind after a

The Lurker Below is a kraken boss in the Serpentshrine Cavern raid. The only way to summon it is by fishing from a Strange Pool and thereby calling the kraken to the surface of the water.