This article is using {{Card template}}.
See Help:Style guide/Card for how to edit this kind of article.
Edit this article
The Lich King
42818 • ICC_314
Regular 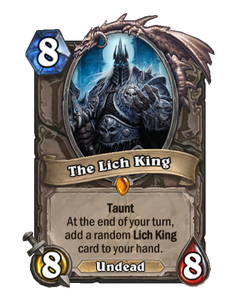 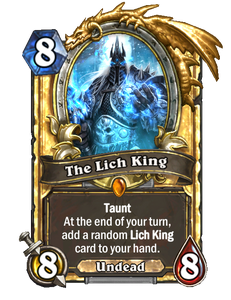 Dimensions: Full • 330 x 410px
Elite
Taunt
At the end of your turn, add a random Death Knight
card to your hand.
Flavor text

"All that I am: anger, cruelty, vengeance, 8 attack - I bestow upon you, my chosen knight." 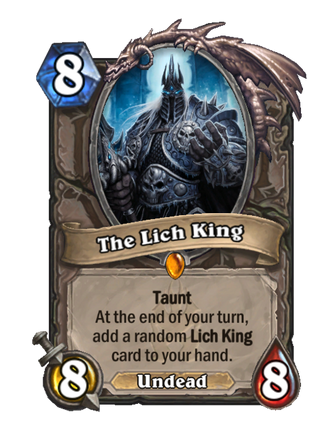 The Lich King is a legendary neutral minion, from the Knights of the Frozen Throne set. 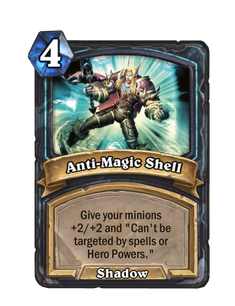 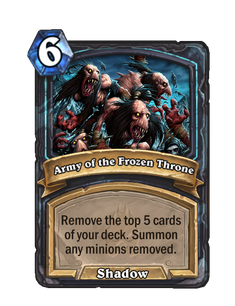 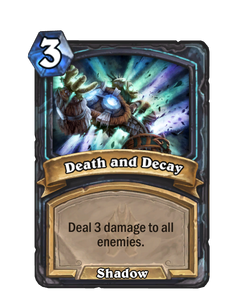 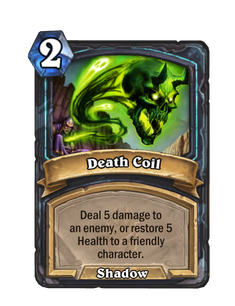 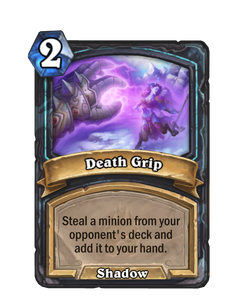 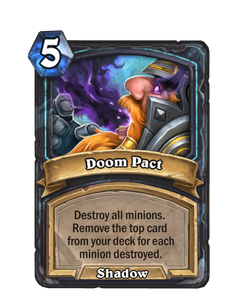 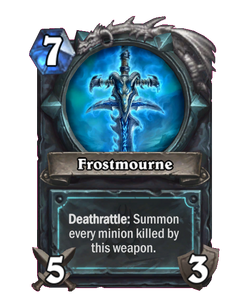 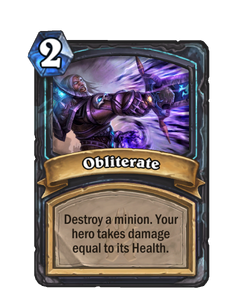 The Lich King is similar to

Ysera, as it's a large card that generates special, powerful cards at the end of your turn. Notably, this minion's stats are identical to

Ironbark Protector, but with a massive upside. This minion has much higher attack than Ysera, making it more offensively powerful, but the lower health makes it far easier to trade into. Taunt is both a benefit and a downside, as the Taunt can be used to protect your hero and valuable minions, but The Lich King himself cannot be hidden behind other Taunts, making it easier for your opponent to destroy.

The largest downside of The Lich King is the randomness of his effect and the extreme difference between cards. Cards such as

Anti-Magic Shell are far better when ahead on the board, whereas

Army of the Dead are far better when behind.

Remember that the majority of Death Knight cards are Shadow spells, making cards like

There are eight Death Knight cards available, giving each a 12.5% chance of being added to your hand. Because The Lich King's effect triggers at the end of your turn, barring any Secrets, he is guaranteed to generate at least one card for you.

This is an extremely powerful buff if you already have multiple minions on board, but it can be worth using just to keep a minion you want protected from removal spells, such as the Lich King himself.

Army of the Dead[]

This card can potentially generate a huge board swing, but is very risky because it removes any non-minion cards drawn. It also doesn't activate their Battlecries and brings you a lot closer to fatigue. This card is more effective on control Deathrattle-based decks and it is recommended to hold this card back until you draw your important non-minion cards first, such as the hero cards.

A simple but powerful board clear that doesn't damage your own board, and can even be used as a finisher.

A flexible single-target card that can be used for removal, a finisher, and healing in more desperate cases.

This is a fairly simple spell that should be played as soon as possible. It can potentially steal an important minion from your opponent, such as

Archmage Antonidas, or even another

The Lich King himself, but can also steal a weak early game minion.

This card is a very cheap full board clear, but because it removes cards from your deck, it is unwise to use this on a packed board. It will also remove cards for each of your own minions, so the best scenario to use this card is when you have no minions and the opponent has a few large minions. Like with Army of the Dead, you may want to hold off playing this until you have drawn your important cards. Playing the card with no more cards in your deck does not cause fatigue damage, so it's best saved for the end of the game in control matches.

This weapon's stats and effect is extremely powerful, but needs a few turns for it to return your investment. If you can manage to kill even one or two medium to high-powered minions, it can turn the board in your favor after it breaks. Taunt minions are great targets to kill with Frostmourne. This strategy is more effective on tankier classes like Priest and Warrior, but even if you don't have much health remaining, you can still use this to deal a respectable amount of face damage each turn.

This card is an extremely cheap hard removal, but for classes that need stricter health management like Rogue or Warlock, this is a risky card to use on high-health minions. It is well worth using on a Divine Shield minion.

The Lich King is the master and lord of the Scourge, which he rules telepathically from Icecrown Glacier atop the Frozen Throne.

Kil'jaeden the Deceiver created the Lich King from the spirit of the orc shaman Ner'zhul to raise an undead army to weaken Azeroth in preperation of the Burning Legion's invasion. Initially trapped within the Frozen Throne with

Frostmourne, the Lich King eventually betrayed Kil'jaeden and merged with the human Arthas Menethil. At the climax of the war for Northrend, the Lich King was defeated by Highlord

Tirion Fordring and his champions. With the destruction of Frostmourne and the death of Arthas,

Bolvar Fordragon took up the mantle of the Lich King in order to keep the undead Scourge in check.

The Lich King Arthas was the titular antagonist of World of Warcraft: Wrath of the Lich King.