This article is using {{Card template}}.
See Help:Style guide/Card for how to edit this kind of article.
Edit this article
The Glass Knight
48107 • GIL_817
Regular 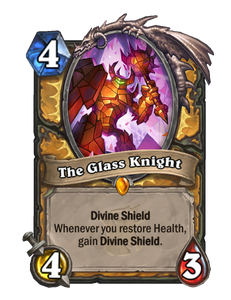 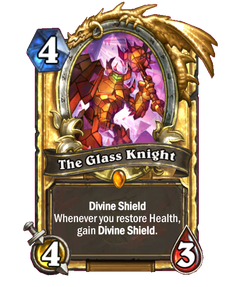 She seems scary, but she's got a glass jaw. 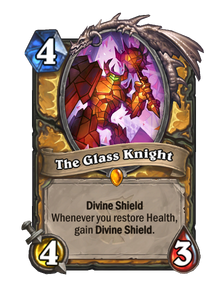 The Glass Knight is a legendary paladin minion card, from the The Witchwood set.

Given the card's ability, it should be paired with healing cards, such as Benevolent Djinn and Holy Light. It has low health but makes up for it with the replenishment of its Divine Shield. Despite this, to prevent it from dying on the turn it is played, it may be smart to have a taunt on board, such as Righteous Protector. Even in decks that hardly run any healing, its statline is good enough to fit into midrange decks.

Works well with Bolvar, Fireblood allowing it to give substantial boost due to being able to receive Divine Shield multiple times.

She can become extremely deadly when used along Blackguard.

Autodefense Matrix is a good option when you run out health to be restored.

The Glass Knight has an almost infinite Divine Shield, and you must abuse this effect. Adaptation and a possible Windfury. Blood Knight, Rallying Blade and Light's Sorrow are good ways to make a better use of her "infinite" shield resource.

The Glass Knight is unique to Hearthstone. It was originally a human paladin who, after being injured too badly to ever go back into battle, chose to have her spirit imbued into a glass golem rather than live out the rest of her years unable to defend Gilneas. Normally these golems are in stasis and a part of the Gilnean church's stained glass windows, but they wake up when the city needs defending.[1]

The Glass Knight's appearance, particularly her orange coloration and green visor, may be partially inspired by the Power Suit worn by Samus Aran, the main protagonist of Nintendo's Metroid video game franchise.