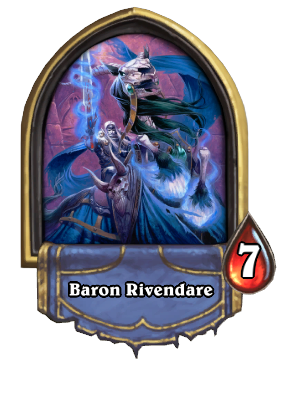 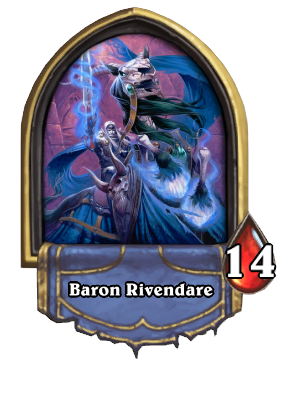 The most powerful Death Knights in Naxxramas are the pinnacle of Kel'Thuzad's guard.

The Four Horsemen is a boss encounter found in the Curse of Naxxramas adventure. It is the third and final encounter in the adventure's third wing, the Military Quarter.

Baron Rivendare, leader of the Horsemen, is the enemy hero for the encounter, while the other Horsemen feature as minion cards. 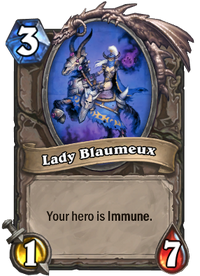 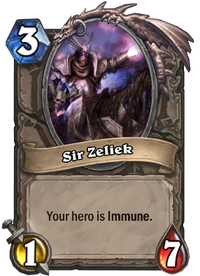 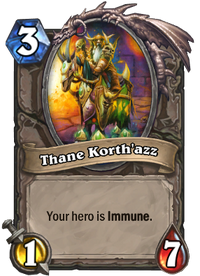 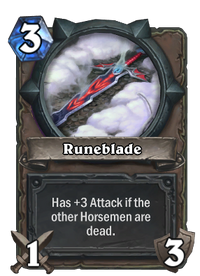 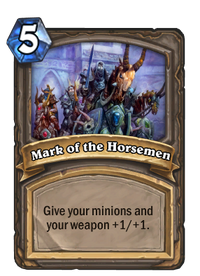 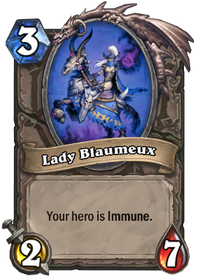 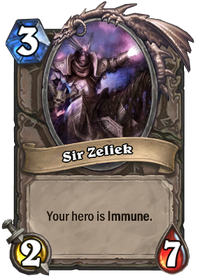 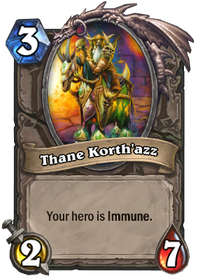 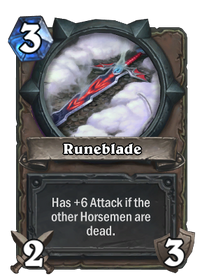 In Heroic mode a Runeblade is always a first draw of Baron Rivendare.

The fight begins with Lady Blaumeux (Heroic), Sir Zeliek (Heroic) and Thane Korth'azz (Heroic) on the board.

Playing Doomsayer will cause the minion to be instantly destroyed, while Equality will simply fail to take effect. No mana will be refunded, although you will be treated to a little gloating from Kel'Thuzad. This makes freeze mage and paladin in general very poor choices for this boss. However, if Doomsayer is resummoned by Resurrect, it will remain in play and be able to take effect normally.

If you manage to transform Baron Rivendare into a different hero, such as Lord Jaraxxus or Ragnaros the Firelord, you will be able to play the prohibited cards normally.[1]

One strong class for Heroic mode is priest. Note that after defeating The Four Horsemen in normal mode, you want to run Deathlord for heroic mode, because Baron Rivendare has no minions in his deck, making Deathlord a very effective minion with no drawback.

At the beginning of the game try to mulligan for Shadow Word: Pain, Silence and Deathlord (in Heroic). The Baron will probably play a secret on his turn 1 - either Avenge, Redemption or Repentance. On turn 2 you should aim to Shadow Word: Pain one of the Horsemen. If the Baron's secret turns out to be Avenge you can Silence the buffed horseman to eliminate the stat boost and the immunity at the same time. In the case of Redemption you can let him live until you are able to effectively finish him off (by using Wild Pyromancer or Holy Smite). If it's neither of them, then don't play Deathlord on turn 3 because his health will be reduced to 1. The optimal play is playing Ironbeak Owl to silence another horseman, as this will waste his secret and the Owl only has 1 health anyway. Another good turn 3 play is Crazed Alchemist to change a 2/7 to a 7/2, followed by Holy Smite. The alchemist will only lose 1 health, effectively also wasting his secret.

However, even though you have ample ways to destroy the horsemen, try not to kill all 3. This will give the Runeblade +6 attack, which is much worse than just keeping a 2 Attack horseman on the field. To win then, you have two options. The first is to silence the last horseman and finish the Baron with Mind Blast and Holy Fire. The second is to steal the last horseman using Shadow Madness or Cabal Shadow Priest, making sure it has full health when you do so. Then, use Divine Spirit to double his Health to 14, followed by Inner Fire or Crazed Alchemist change his Attack to 14, and use him to defeat the Baron.

To buy time to draw your winning combos, play Acidic Swamp Ooze to destroy the Runeblade, forcing him to waste mana to re-equip, as well as healing yourself. The ultimate stall card is Loatheb. Since Baron Rivendare only plays spells, it will be extremely hard for him to play any cards next turn to remove him. Thus, Loatheb not only wastes a turn for your opponent, but is also almost a guaranteed 5 damage, which is huge against a boss with only 14 health.

Add a Faceless Manipulator on a horseman to cheat the system. Makes your hero immune and stops Baron Rivendare from doing anything. Use Divine Spirit and Inner Fire on the horseman to further increase your odds of winning.

The Whispers of the Old Gods expansion introduced Shadow Word: Horror which can trivialize the fight by removing all 3 horsemen in one go.

Another good option for Heroic Horsemen is the druid. The class is compelling due to Naturalize, which eliminates a Horseman before either Redemption or Avenge are played. It's worth restarting the fight until you have it in your starting hand.

The key to this strategy is to encourage the Baron to play his cards. Both Bloodsail Corsair and Acidic Swamp Ooze will punish him severely for an early Runeblade, as well as giving him targets for Soulfire, Frostbolt, and Shadow Word: Pain. Loot Hoarders are also removal-bait that keep your hand full of options.

In the mid-game, carefully weigh out the perfect moment to play Poison Seeds. If Redemption is in play, Swipe will likely be your follow-up. If Avenge triggers, have Keeper of the Grove ready. Though you may be tempted to include Starfall, keep in mind that it is a dead card once the minions are dead. Bloodmage Thalnos is a better Swipe complement for this fight, if you own one. Use Healing Touch as early as Turn 3, to survive to this point.

Your end game will revolve around the un-targetability of the Faerie Dragon and Spectral Knight. With no minions opposing them, their greatest fear is Consecration or a Runeblade. Crazed Alchemist really shines as support here, assuming you've not already comboed yours with Bluegill Warrior or Wrath.

One last consideration is to leverage the 'mill deck' angle. Naturalize will help to fill the Baron's hand, especially if he is using his hero power. With all minions dead, a mittful of targeted cards, and a comfortable life total opposing him, the Baron will rage uselessly as Runeblade after Runeblade goes up in flame. 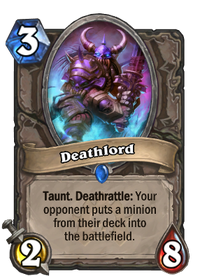 Kel'Thuzad
The Four Horsemen are my most powerful death knights. I'm looking forward to this.

Baron Rivendare
We shall grind your bones to dust.

Sir Zeliek
Invader! Turn away while you still can!
Lady Blaumeux
Come Zeliek, let us have our fun.
Baron Rivendare
Enough prattling. Let them come.
Thane Korth'azz
Bring it on, ye snivelin' oaf!

Mark of the Horsemen

Baron Rivendare
Lambs to the slaughter!

Doomsayer... You think you are so clever.

Equality?! Not on my watch!

Baron Rivendare
No! I need more time!
Kel'Thuzad
The Military Quarter has failed me! It's so hard to get good help these days.

Kel’Thuzad’s royal guard can be found in the Four Horsemen, each with their own twisted powers at their disposal: Lady Blameaux is a master of the shadow, able to drain the essence of life from those she encounters; Thane Korth’azz controls the destructive power of fire, and can even call forth fiery meteors from the skies; Sir Zeliek was once a paladin, so powerful in life that he can still wield the Light in death; and Baron Rivendare, once a friend of Kel'Thuzad, now continues to serve his old comrade in death with his corrupting powers and skeletal Deathcharger.[2]

The Four Horsemen
"The most powerful death knights within Naxxramas are the four horsemen. They represent the pinnacle of Kel'Thuzad's guard. The first, Thane Korth'azz, holds the power of flame. The next, Lady Blaumeux, calls forth the power of shadows, drawing the souls of the living into the voracious embrace. Sir Zeliek, a paladin in life, so strong in his faith, that even in undeath, the power of the light still heeds his call, smiting his foes in battle. The final death knight, Lord Mograine, was the finest warrior that the death knights had ever seen. However, after the events of Azeroth, he vanished without a trace. Kel'Thuzad has appointed Baron Rivendare in his place."
- Commander Eligor Dawnbringer

Baron Rivendare
Baron Rivendare is a powerful death knight in the service of the Lich King. Originally ruling over the city of Stratholme for the Scourge, he now leads the Four Horsemen of Naxxramas in place of Highlord Mograine.

This encounter's introductory remarks mirror the World of Warcraft encounter.

Thane Korth'azz yells: To arms, ye roustabouts! We've got company!
Sir Zeliek yells: Invaders! Cease this foolish venture at once! Turn away while you still can!
Lady Blaumeux yells: Come, Zeliek, do not drive them out. Not until we've had our fun!
Baron Rivendare yells: Enough prattling. Let them come. We shall grind their bones to dust.
Lady Blaumeux yells: I do hope they stay long enough for me to... introduce myself.
Sir Zeliek yells: Perhaps they will come to their senses... and run away as fast as they can.
Thane Korth'azz yells: I've heard enough a' yer snivelin'! Shut your flytrap before I shut it for ye'!
Baron Rivendare yells: Conserve your anger. Harness your rage. You will all have outlets for your frustrations soon enough.

A bug originally caused Baron Rivendare to be able to cast Frostbolt on himself. This was fixed in Patch 2.0.0.7234.