Edit
The Fist of Ra-den
Regular 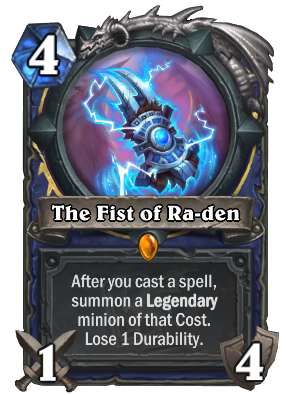 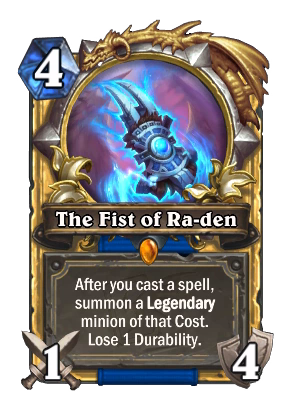 Uncollectible
After you cast a spell, summon a Legendary minion of that Cost. Lose 1 Durability.
Flavor text

The mighty Ra-den was known as the Keeper of Storms. Unfortunately, he could not keep his fist.

The Fist of Ra-den is a legendary shaman weapon card, from the Galakrond's Awakening set.

Regular The Fist of Ra-den is obtained by defeating Nithogg in Galakrond's Awakening's Chapter 2 of E.V.I.L. campaign.

This card is similar to Atiesh, except that it can be equipped by itself without the need to play Medivh, the Guardian. On average, The Fist of Ra-den will be weaker than Atiesh. Most Legendary minions have average or sub-par stats, with most of their power coming from their Battlecry or conditional effect. However, the sharply cheaper casting cost and extra durability make up for this weakness.

Generally, The Fist of Ra-den performs best when played alongside midrange to high-cost spells. Rain of Toads, Eye of the Storm, Hagatha's Scheme, and Earthquake are all great picks that can heavily swing the board in your favour with the free Legendary minion provided.

The Fist of Ra-den is one of the artifacts used by elemental shamans in World of Warcraft: Legion.

Aman'Thul the Highfather, leader of the titan Pantheon, entrusted his greatest servant, Highkeeper Ra, with this artifact, which could channel the fury of the storms. Ra used it to bestow life on the titan-forged mogu race, and he wielded it in battle against the Black Empire for years beyond counting. Later lost to Ra, the weapon was ultimately recovered by the August Celestial Xuen, who saw its immense and dangerous power, and chose to safeguard it until someone worthy could take up the weapon in a righteous cause once again.