Hearthstone Wiki
Register
Don't have an account?
Sign In
Advertisement
in: All cards, Wild format cards, Portals,
and 2 more

This article is using {{Card template}}.
See Help:Style guide/Card for how to edit this kind of article.
Edit this article
The Dark Portal
56511 • BT_302
Regular 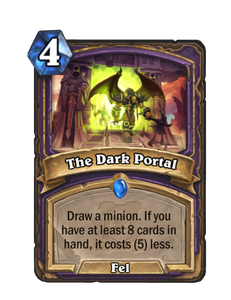 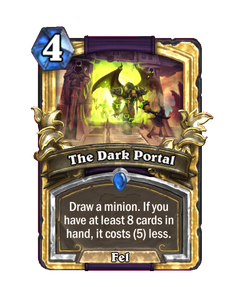 Some say it's the source of Azeroth's greatest problems—aside from the gnomes. 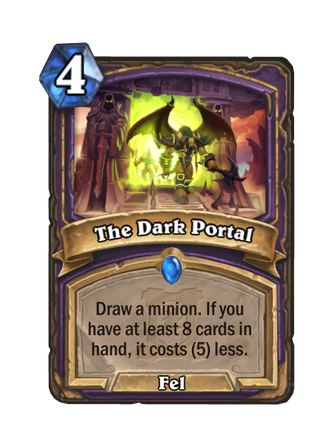 The Dark Portal is a rare warlock spell card, from the Ashes of Outland set.

The Dark Portal is best used in Handlock decks that plan to take advantage of large hand sizes and big minions. Getting a -4 discount on minions like

Dread Infernal can give a huge advantage. However, setting up this card typically results in a low tempo until you can play the discounted minion in a future turn. If you are forced to use cards consistently against particularly aggressive decks, then this card becomes less useful due to having a lower chance of the player having 8 or more cards in their hand.

The Dark Portal is a gateway that connects Outland to Azeroth. The two sides were constructed by

Gul'dan through the manipulations of Sargeras, allowing the orcish Horde to invade Azeroth.

The Dark Portal, also known as the Great Portal, is one of the two gateways between the worlds of Azeroth and Draenor (now Outland). The Azeroth side portal is located in what is now known as the Blasted Lands in southern Eastern Kingdoms, while its counterpart is in Hellfire Peninsula on Outland, on the Stair of Destiny. Before the destruction of Draenor, it was located in the eastern section of Tanaan Jungle.

This card's artwork possibly depicts Lord Kazzak—who reopened the portal prior to the events of The Burning Crusade—or his lieutenant Highlord Kruul.