Hearthstone Wiki
Register
Don't have an account?
Sign In
Advertisement
in: All cards, Wild format cards, Yeti art,
and 2 more

This article is using {{Card template}}.
See Help:Style guide/Card for how to edit this kind of article.
Edit this article
The Caverns Below
41222 • UNG_067
Regular 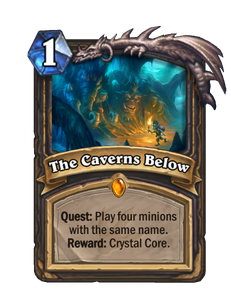 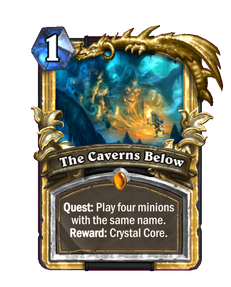 Why can't it ever be The Taverns Below? 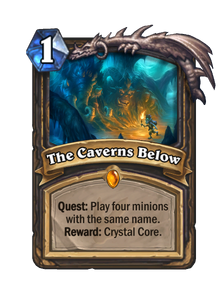 The Caverns Below is a legendary rogue spell card, from the Journey to Un'Goro set. 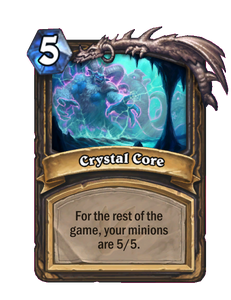 An effective way to complete The Caverns Below is to use return to hand effects such as Youthful Brewmaster, Shadowstep, Cheat Death, Vanish as well as cards that create copies of other cards, such as Mimic Pod, Sonya Shadowdancer and Zola the Gorgon. For a list of all cards with return and copy effects, see return to hand and copy.

You can also complete this quest using the Flame Elemental tokens generated by Igneous Elemental and Fire Fly. Not only do these quickly place minions with the same name into your hand, they generate 1 mana 5/5s once the quest is complete, and have Elemental synergy.

Crystal Core is one of the trickier Quest rewards to make use of. It has obvious synergy with cheap, low-statted minions like Bloodmage Thalnos or low-statted minions with strong effects or keywords like Elven Minstrel, Wax Elemental, and Vicious Scalehide. On the flip-side, it has severe anti-synergy with many high-cost minions, as most will be reduced in stats or gain little to no benefit. Low-cost charge minions like Stonetusk Boar and Southsea Deckhand are extremely effective with Crystal Core, which make up the bulk of the damage dealing and allows return-to-hand effects to remain highly effective. Other cheap token-generating minions such as Violet Teacher and Moroes can also work well with it.

Because the quest reward is a spell, Preparation is very useful for playing the reward earlier.

The crystals of Un'Goro Crater are ancient titan energy sources. The Crystal Core is a particularly powerful one, and represents infusing the affected minions with titan energy, comparable to the opposite of Old God corruption, "except that you look like a Norse god at the end instead of a tentacle monster. A 5/5 Norse god."[26][27][28]