This article is using {{Card template}}.
See Help:Style guide/Card for how to edit this kind of article.
Edit this article
The Boogeymonster
38895 • OG_300
Regular 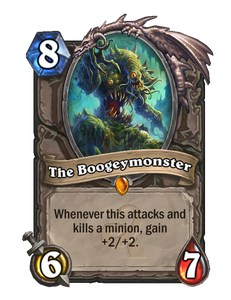 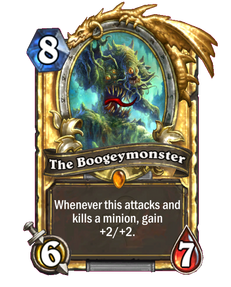 Has 20 years of training in classical ballet, but ALLLLLL he ever gets asked to do is boogie. 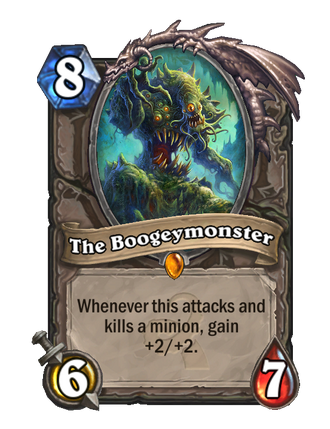 The Boogeymonster is a legendary neutral minion card, from the Whispers of the Old Gods set. 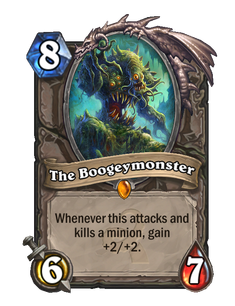 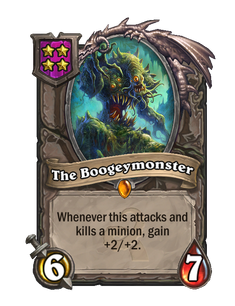 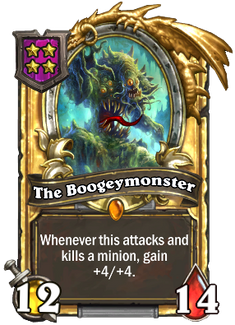 The Boogeymonster starts with poor stats for its cost, but its triggered effect provides the potential for it to grow to gargantuan size, or at least trade for multiple minions. Because its effect is triggered only by minion death, The Boogeymonster is best used for trading with other minions, but if it survives long enough for its Attack to increase, it can become a powerful source of face damage.

Early summoning with cost reduction can increase the chance of surviability and the openings for great damage.

Prismatic Lens is a good example.

The Boogeymonster is best suited for quick trades, and, if not stopped, most certainly will destroy the game. His low stats need to be compensated by secondary ways, like Lifesteal, Poisonous, Immune and Divine Shield. After a certain point, his Health will be really low, and it can be used as a glass cannon, for a great one time big damage, or, it can become a huge defensive tower, combining

Crazed Alchemist with anything that creates a Taunt.

The main challenge with The Boogeymonster is keeping it alive long enough to benefit from its triggered effect, and the tempo drain from its 8 mana cost. The best way for it to gain immediate value is to put it in a Warrior deck with Charge. It can be effective against Zoo decks that don't have single target removal in hand, but note that the effect only activates when The Boogeymonster initiated the attack, meaning the opponent is free to trade against it on their own turn without penalty. It is less effective against large minions, although healing can help it to withstand multiple trades. Play it when the opponent already has a medium minion or two on the board, giving you a good chance of trading with one of them next turn, buffing the Boogeymonster. If the opponent plays The Boogeymonster, you should probably attempt to remove it before it can start trading with your minions.

There are way to trigger its effect the moment it has been played.

Animated Broomstick can resolve its weakness of having to wait for a turn to attack which provides its triggered effect instantly.