This article is using {{Card template}}.
See Help:Style guide/Card for how to edit this kind of article.
Edit this article
The Black Knight
1656 • EX1_002
Regular 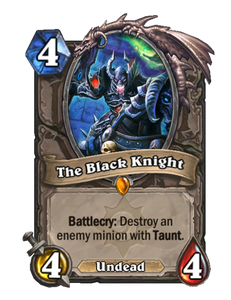 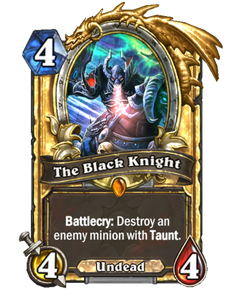 He was sent by the Lich King to disrupt the Argent Tournament. We can pretty much mark that a failure. 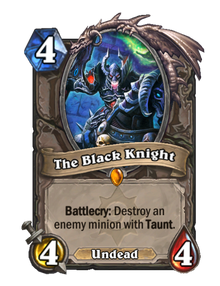 The Black Knight is a legendary neutral minion card, inducted into the Legacy set, formerly from the Classic set. 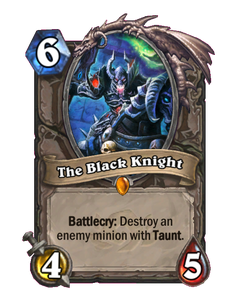 The Black Knight is a minion meant to start some game-ending momentum. He gets a Taunt minion out of the way so that you may begin hitting your enemy as soon as possible. As a utility, he is very good, as most people buff their best minions with Taunt so as to kill any minions that would try to attack them.

Buffs such as Mark of the Wild, Mark of Nature and Ancestral Healing can be used on an enemy minion so that The Black Knight can take it out. In Wild format, decks that have a lot of Spare Parts also have a chance to get Rusty Horn, with the combination of Rusty Horn and Black Knight producing a 7-mana Chillwind Yeti with a destroy-effect, effectively removing an enemy minion for only 3 mana.

"Enough of this insolence! Prepare to die!"

The Black Knight is seen during the Argent Tournament, the predecessor to The Grand Tournament. He is challenged to combat, and eventually defeated by champions wielding the Argent Lance.

He appears later in the Crusaders' Coliseum for a rematch with undead skin and in the process of fighting, he loses his flesh, becoming The Skeleton Knight. He later loses his bones during the fight, turning into a ghost.

After flying into the coliseum and slaying a herald of the crusade (either Arelas Brightstar or Jaeren Sunsworn), the Black Knight was defeated by the champions who were training there.