This article is using {{Card template}}.
See Help:Style guide/Card for how to edit this kind of article.
Edit this article
The Beast
962 • EX1_577
Regular 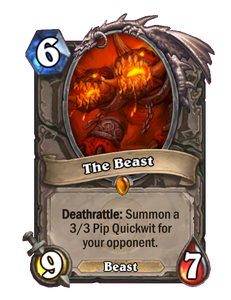 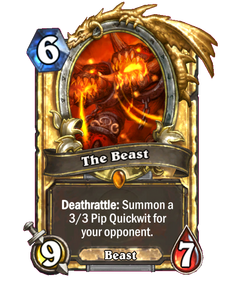 He lives in Blackrock Mountain. He eats Gnomes. That's pretty much it. 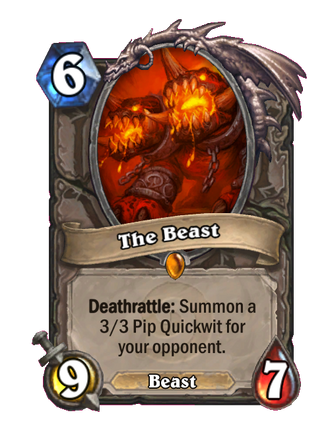 The Beast is a legendary neutral minion card, inducted into the Legacy set, formerly from the Classic set. 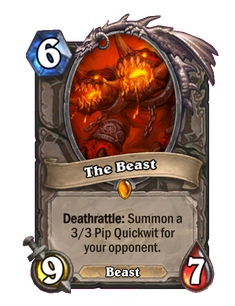 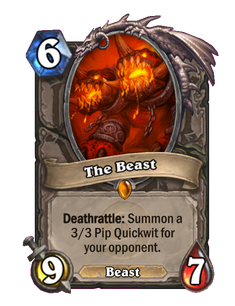 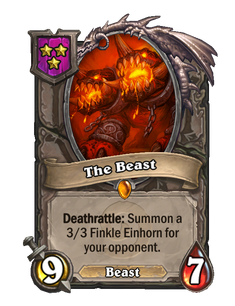 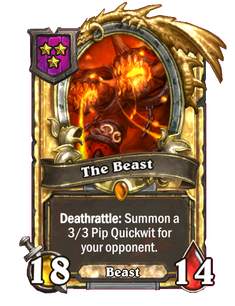 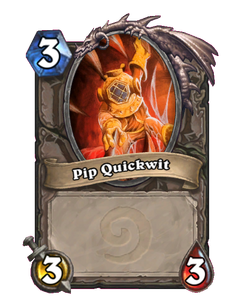 The Beast is an aggressive late game minion that comes with an unfortunate Deathrattle. The Beast synergizes better in hunter decks that focus on the use of Beasts. Being a mostly offensive creature, it is best to protect it with creatures that use Taunt or grant it Charge soon after summoning. This is especially true when considering upon death, it grants your opponent a 3/3

Pip Quickwit. Silencing The Beast to prevent your opponent from profiting from its Deathrattle is also a valid strategy.

Without negating its Deathrattle, this card can be considered to be poorer than

Boulderfist Ogre. The Ogre has the same Health as The Beast but will not give your enemy a 3/3.

Pip Quickwit in play, you probably have little need of this section - you're already a strategic mastermind for defeating your opponent's The Beast!

Normally after dealing with The Beast, unless you used a spell to destroy it, you will probably not have many minions on the field. Giving Pip a buff, such as

Mark of the Wild or

Blessing of Kings is a good way to get back into the game. Alternatively, you can use a Taunt effect such as

The Beast is a boss found at The Furnace in Upper Blackrock Spire. It appears to be a

Core Hound that has been captured by the forces of Nefarian for use in his breeding experiments.

At some point before he is encountered by the party, the Beast swallowed Pip Quickwit, a gnomish adventurer who has survived in the Beast's stomach for an unspecified period of time. Skinning The Beast will free Pip Quickwit.

"I've been stuck inside the belly of that thing for months! What day is it anyway?"

Nefarian's dragonkin take obscene delight in the barbaric torture of Ragnaros's captured minions. Despite suffering unimaginable agony, one core hound remained lucid enough to be retrained, and his ferocity makes him an ideal guard in the upper levels of Blackrock Spire.