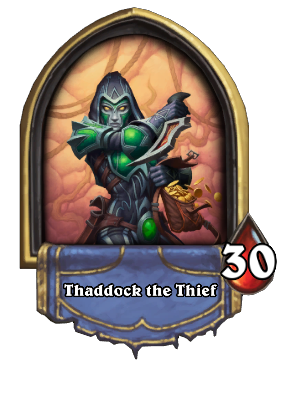 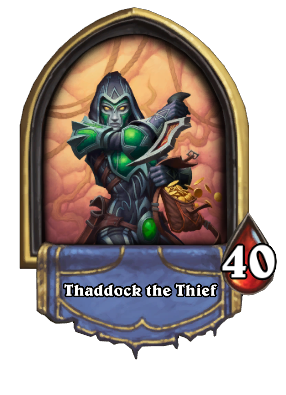 One moment her minions are there... the next... gone!
External links

Thaddock the Thief is a boss that can be encountered during the Dungeon Run.

Thaddock the Thief runs a Quest Rogue deck. Her hero power makes it much more viable as she is able to bring one of her minions back to her hand from the board every turn. At first her minions might seems easily manageable, but if you let her finishing the quest, you decrease the chance of victory. The best way to defeat her is to delay the quest from completing. To ensure this, kill any minions she leaves on the board, and this will also negate her hero power. Once she is out of minions, go face aggressively as she will no longer manage to finish the quest in order to defend herself. Glyph of Warding is very effective against her as it can prevent her from playing her low cost cards and retrieving it on the same turn.

Thaddock the Thief
In and out of the shadows...

Thaddock the Thief
Are you new to this dungeon? We're not much for talking here.

Thaddock the Thief
Behind me.
Move quick.
Never give them a target.
Step back.

Stealing The Caverns Below / Crystal Core

Thaddock the Thief
Oh, an adventurer of means...

Thaddock the Thief
Now let's see what you had... Really? You actually chose these cards?

Thaddock the Thief is unique to Hearthstone. She is an undead with a band of outlaws.

The undead are beings that have died and have had their souls trapped between life and death. They derive power from necromantic magic. Most common examples being zombies or ghosts. Undead are typically mindless, bloodthirsty fiends hostile toward any living thing that comes across their path. But some have managed to retain their memories and be who they were in life.