This article is using {{Card template}}.
See Help:Style guide/Card for how to edit this kind of article.
Edit this article
Test Subject
49265 • BOT_558
Regular 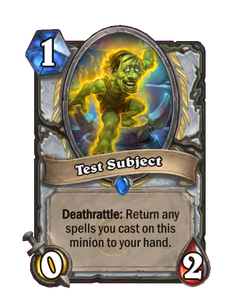 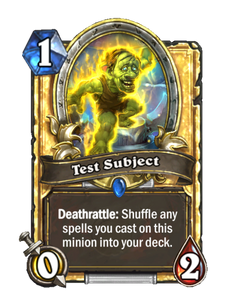 Dimensions: Full • 330 x 410px
Deathrattle: Return any spells you cast on this minion to your hand.
Flavor text 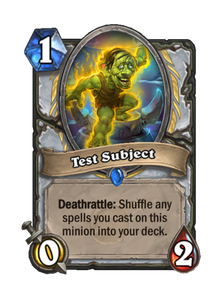 Test Subject is a rare priest minion card, from The Boomsday Project set.

Test Subject is a useful supplemental card for decks that rely on the Divine Spirit/Inner Fire combo and minion buffs cards in general. While normally you need to save those cards for a huge damage burst, Test Subject lets you use these cards on a weaker minion without wasting valuable resources. In Wild, you can use Radiant Elemental, Embalming Ritual, and Topsy Turvy to perform an infinite loop to cycle through your entire deck, an effective combo for Nomi Priest decks.

The aforementioned OTK combo generates a bunch of Divine Spirits to be put onto a Stonetusk Boar so that the player can Topsy Turvy it, and using many Vivid Nightmares, generate many high-attack boars with charge. The process might seem complicated, but practice will greatly improve your skills at this combo.

The combo requires the following:

The only trick is to make sure to have enough hand space to take in the number of Vivid Nightmare + Divine Spirit + Topsy Turvy your Test Subject will generate for each iteration of Topsy Turvy + Test Subject, to prevent Topsy Turvy from being destroyed when generated.

The basic steps (one variation) are as follows:

You can simulate and try out the combo for yourself at this website: Combo Priest online simulator

For reference, each turn in Hearthstone lasts a maximum of 75 seconds (1:15). Note that card animations take time to complete and will decrease the amount of time available to complete the combo; for example, waiting for cards that Topsy Turvy generates, summoning boars using Vivid Nightmares, and activating secrets such as Explosive Trap and Wandering Monster.

Video of how the combo works.

Test Subject's flavor text is a reference to Leper Gnome.