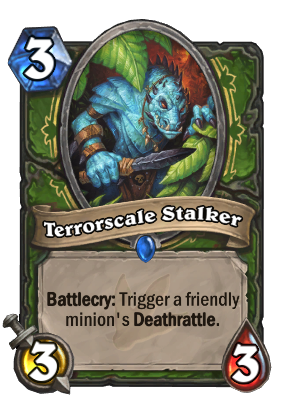 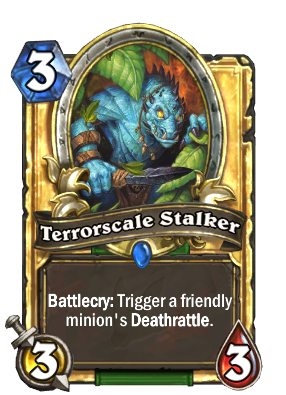 Likes to scare his friends half to death.

Terrorscale Stalker is a rare hunter minion card, from the Journey to Un'Goro set.

Terrorscale Stalker can be obtained through Journey to Un'Goro card packs, or through crafting.

This minion is essentially a cheaper Princess Huhuran, although it's weaker and not a Beast.

It works well in a general Deathrattle-themed deck, and in combination with minions with powerful Deathrattles. It plays on curve very effectively after Kindly Grandmother, or at least Loot Hoarder.

If you need to trigger a friendly minion's deathrattle, you can do it with this minion, two turns earlier than it would take with Princess Huhuran. Alternatively this minion can be played much later in the game to trigger large deathrattles immediately, e.g. on turn nine with a Savannah Highmane, putting a 6/5, a 3/3 and two 2/2s, three of which are beasts, on the board in a single turn.