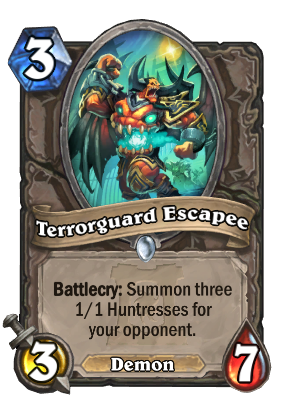 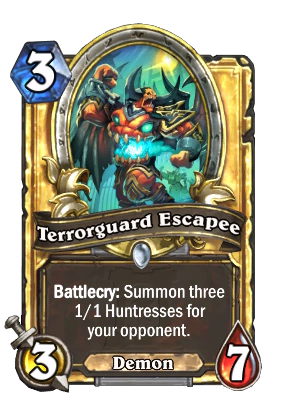 Poor guy is terrified, look at his faces.

Terrorguard Escapee is a common neutral minion card, from the Ashes of Outland set.

Terrorguard Escapee can be obtained through Ashes of Outland card packs, through crafting, or as an Arena reward. 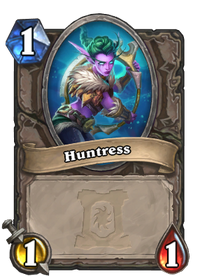 Terrorguard Escapee is a Cornered Sentry with +1/+1 for 1 mana more while forgoing Taunt. While the three Huntresses it summons may do 3 damage to turn it into a 3/4, this minion's lack of Taunt means that the Huntresses may be able to attack face. However, this also means that Terrorguard Escapee can be protected by minions who already have Taunt, keeping its high statline alive. It is also possible to use area of effect like Whirlwind or Arcane Explosion to destroy the Huntresses before they can attack. Being a Demon, it can be cheated out with cards such as Voidcaller or Fel Summoner to bypass summoning the Huntresses. Alternatively, you can use the Huntresses to your advantage against Resurrect Priest decks by filling their resurrection pool with 1/1s.