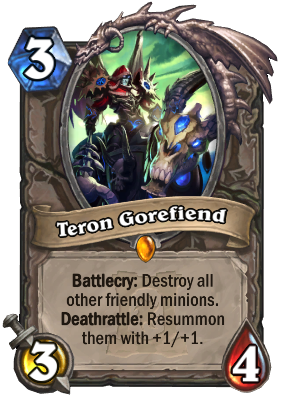 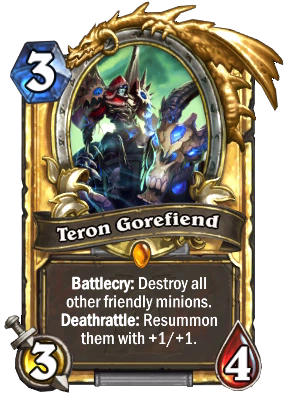 Battlecry: Destroy all other friendly minions. Deathrattle: Resummon them with +1/+1.
Flavor text

For the boss in Trial by Felfire Challenges, see Teron Gorefiend (boss).

Teron Gorefiend is a legendary neutral minion card, from the Ashes of Outland set.

Teron Gorefiend can be obtained through Ashes of Outland card packs, through crafting, or as an Arena reward.

Teron Gorefiend has a powerful, but difficult to use effect. He requires other minions in play, and often costs board advantage the turn he's summoned.

His first use can be similar to Carnivorous Cube, which allows him to cheaply activate Deathrattles and also summon your Deathrattle minions for a second use of their effect. This is very effective combined with Eggs, which gain their Deathrattles and return when Gorefiend is destroyed with attack value, making it easier for them to die a second time.

The secondary use for Teron Gorefiend is as a board buff. While this is a bit harder to make immediate use of, there are a few advantages over a standard +1/+1. You will get the 3/4 upfront, which is a fantastic statline for a card that gives your entire board a buff. It also essentially protects your board from area of effect attacks, forcing your opponent to deal with the 3/4 Gorefiend before they can clear the rest of your cards. Shamans can make particular use of this, filling their board with low threat Totems to combine with Splitting Axe and Totemic Reflection, then giving them all +1/+1.

You don't have to wait for a huge board to play Teron. Destroying even a simple 2/3 still gives you a 3/4 that summons a 3/4 on death, which is resilient and sticky, perfect for a token deck. Sometimes it may even be better to play Teron first, then play other minions afterwards to keep pressure on your opponent.

Teron Gorefiend is also quite effective with Deathrattle trigger and copy cards, like Shadowy Figure and Play Dead. This will resummon your entire board with +1/+1, and keep Gorefiend around for a second wave.

Beware of Silence and Transform effects, as these will render your entire board destroyed by Teron with no way to recover them. Shadow Madness can be even more devastating if the opponent has a way to kill off Teron after stealing him, as it will trigger his Deathrattle on their side.

Teron Gorefiend, born Teron'gor, was one of Gul'dan's followers and a member of the Shadow Council. In death, he became the first of the necromantic terrors that became known as death knights — the warriors promised by Gul'dan to appease Orgrim Doomhammer and combat the human mages' powerful magic. Gorefiend convinced Ner'zhul to unite the Horde of Draenor and invade other worlds but was slain by Turalyon at the Black Temple as the planet tore itself apart. Years later he was resurrected once more and returned to the Black Temple where he allied with Illidan Stormrage.