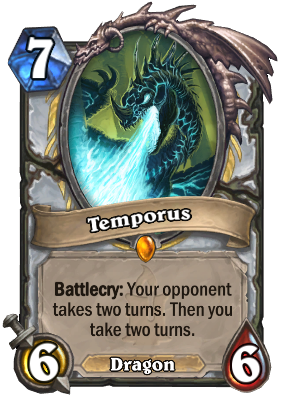 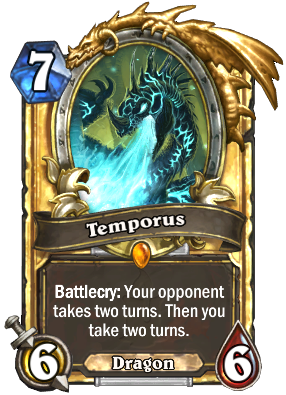 Temporus is a legendary priest minion card, from the Kobolds and Catacombs set.

Temporus can be obtained through Kobolds & Catacombs card packs, or through crafting.

Temporus is very risky card in constructed due to most decks' capability to either kill the opponent with burst damage, given two turns free of interruptions, or build a threatening board to kill the opponent with during the second turn. However, it obviously has the advantage of back-to-back turns for the user. This can be used especially in one turn kill decks effectively. However, due to the risk a player must take, this is generally considered to not be worth it as priests also have access to safer combos.

One of the possibilities for a hit kill turn is to combine Temporus with Malygos. Prepare your board, then play Temporus. After your opponent is done, you'll have 2 turns to play Malygos and another turn for 2 Mind Blast, for a huge 20 damage.

Attack
Your days are done!

Temporus is a member of the infinite dragonflight and the second boss of the Opening the Dark Portal dungeon.

From the World of Warcraft Adventure Guide

Although relatively young, Temporus was instrumental in identifying many of the Infinite Dragonflight's prime targets. As a reward, he was given the responsibility of destroying anyone who might attempt to interfere with the dragonflight's plans.