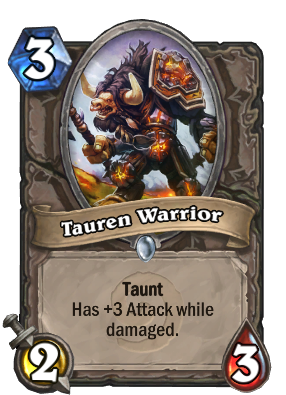 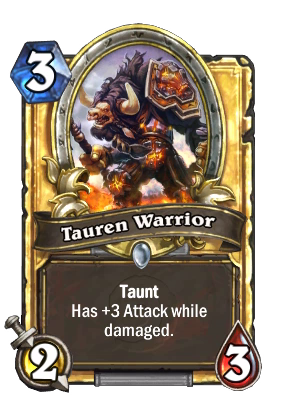 Tauren Warrior is a common neutral minion, inducted into the Legacy set, formerly from the Classic set. 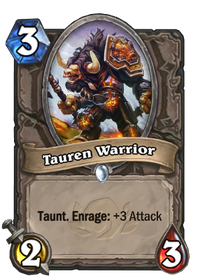 Tauren Warrior can be obtained through Classic card packs, or through crafting.

While a reasonably powerful minion, the Tauren Warrior's main strength (compared to alternatives such as Ironfur Grizzly) is its +3 Attack Enrage effect, which can make it an exceptionally hard hitting minion for only 3 mana. This card therefore combines excellently with any source of directed damage, including cards such as Elven Archer and Abusive Sergeant, and the mage hero power Fireblast. It also has good synergy with buffs such as the shaman's Windfury, the priest's Power Word: Shield and the paladin's Blessing of Kings.

Due to this minion's potential for damage-dealing, it is usually a fairly high priority for the opponent to remove, especially if the controlling player is a mage, therefore able to activate its Enrage at any time using Fireblast.

Tauren Warrior is identical to Amani Berserker except that it has Taunt, and costs 1 more mana. The Taunt can serve as a useful extra line of defence, and with luck can force minions to attack it, triggering its Enrage. Alternatively, the opponent may hesitate to attack it for fear of triggering its Enrage, thus serving to prevent damage to the player's minions entirely. However, the Taunt also prevents the player from shielding the minion from attack, making it highly vulnerable to removable by capable minions.

This appears to be the original, uncorrupted version of Infested Tauren.

Tauren (shu'halo in their native language of Taur-ahe) are huge nomadic creatures who live on the grassy, open plains of Mulgore in central Kalimdor. Tauren are large, muscular humanoids and bovine in appearance, complete with hooves and horns. Their immense bodies are covered with fine, short fur that ranges in color from black, gray, white, red, brown and tan and any mottled combinations or variations thereof.