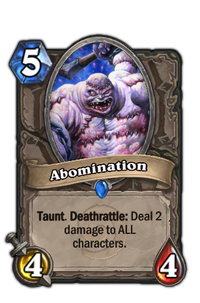 Cards with the Taunt ability at as tanks, forcing enemy minions and heroes to attack them.

I Know a Guy discovers Taunt minions. Mark of the Wild, Mark of Nature, Ancestral Healing, Dark Wispers, Spikeridged Steed, and Bonemare grants a minion Taunt. Houndmaster grants a Beast Taunt. Jade Chieftain grants a Jade Golem Taunt. Bolster and Strongshell Scavenger empower minions with Taunt. Stolen Goods empowers a minion with Taunt in the hand. King's Defender is empowered by minions with Taunt. Hex transforms a minion into a Frog with Taunt. Mirror Image, Feral Spirit, Protect the King!, Malfurion the Pestilent, and Spreading Plague summon minions with Taunt. Hadronox has a Deathrattle that summons your Taunt minions that died during this game.

Below is a list of all cards with the taunt mechanic.

Note: For the purposes of this list, only collectible cards are listed.

Knights of the Frozen Throne

The League of Explorers

One Night in Karazhan

Retrieved from "https://hearthstone.fandom.com/wiki/Taunt?oldid=33143"
Community content is available under CC-BY-SA unless otherwise noted.