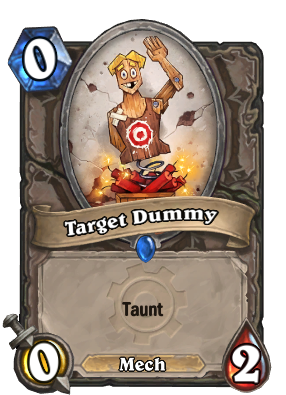 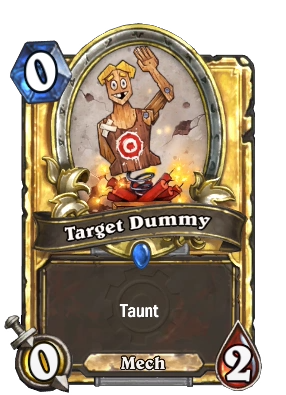 The engineering equivalent of a "Kick Me" sticker.

Target Dummy is a rare neutral minion card, from the Goblins vs Gnomes set.

Target Dummy can be obtained through Goblins vs Gnomes card packs, or through crafting.

Generally blocks a single attack before dying. Throw it down in front of Jeeves to protect his draw engine, or as an extra target for Metaltooth Leaper.

While normally incredibly weak on its own, it does have some useful application when taking advantage of its Mech and Taunt nature. Since it's a Mech, it means it's a valid target for Magnetic minions, which effectively give that minion Taunt and a bit of extra Health. It's a useful combo piece with Mimiron's Head due to its very cheap cost. Although it will not likely survive a turn on its own, you can play it with safe options like Time Warp.

Since it also has Taunt, it means it can be a target for Taunt-specific buffs like Into the Fray and Bolster, buffing its pitiful stats to decent levels on top of retaining its free cost.

In World of Warcraft, a Target Dummy is a gadget that can be crafted by Engineers and which causes nearby monsters to attack it.