This article is using {{Card template}}.
See Help:Style guide/Card for how to edit this kind of article.
Edit this article
Tar Creeper
41418 • UNG_928
Regular 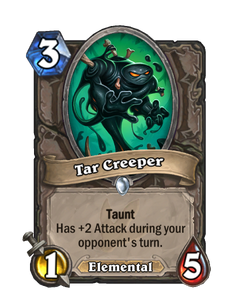 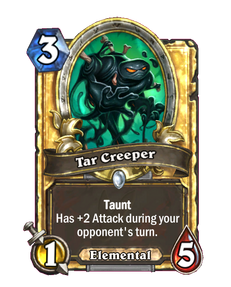 If you won't come to the tar pits, we'll bring them to you! 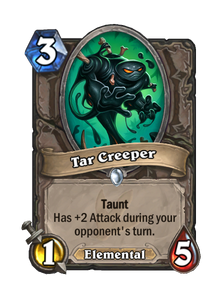 Tar Creeper is a neutral minion card, from the Journey to Un'Goro set.

Tar Creeper is a powerful defensive card, being fairly weak on the controlling player's turn but making up for it by acting as a cheaper Sen'jin Shieldmasta on the opponent's turn. It works an excellent on-curve play in an Elemental deck, being both high value for its cost and boosting cards like Tol'vir Stoneshaper on your next turn.
Since Arena decks tend to have less large removal, playing a Tar Creeper on curve can often force the opponent to sacrifice their entire board, or to pass until they find a way to deal with this minion.

Tar Creepers are tar beasts found near the Lakkari Tar Pits in Un'Goro Crater. They share a model with bog beasts in World of Warcraft, but appear to instead be Elementals made of tar in Hearthstone.