This article is using {{Card template}}.
See Help:Style guide/Card for how to edit this kind of article.
Edit this article
Tanaris Hogchopper
40611 • CFM_809
Regular 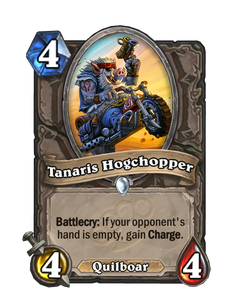 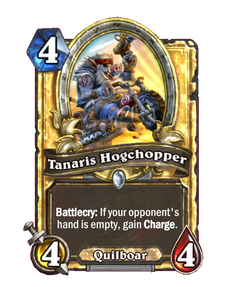 The Hogchoppers are well-known throughout Kalimdor for being a real, actual group. 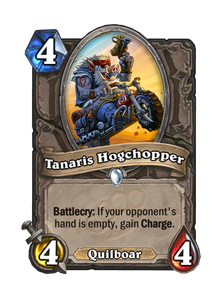 Tanaris Hogchopper is an common neutral minion card, from the Mean Streets of Gadgetzan set.

A cheap powerful counter to Zoolock, a common type of deck that generally either plays or discards their entire hand within a few turns. Also a useful card to choose in Arena, where due to scarce card draw players often end up with empty hands near the end of the game.

It's also a good card against Jade Druids and Combo Rogues who don't run Gadgetzan Auctioneer, because they will occasionally spam out their cards, and it can punish them for doing that.

Summon
Boar to be wild.

Tanaris Hogchopper, along with his cohorts Leatherclad Hogleader and Spiked Hogrider, are "a Quilboar biker gang",[1] one of the many smaller factions operating in Gadgetzan, separate to the three main crime families.[2] Despite the historical animosity between quilboar and the Horde, two of the three bear the Horde's insignia and their vehicles appear goblin in design. The quilboar normally prefer primitive weapons and crude shamanic magic to mechanical technology, but these three appear to have embraced all that Gadgetzan has to offer.

The quilboar are a race of primitive boar-men that have razor sharp spines protruding from their muscular, hunched backs. These resilient, fearless creatures inhabit the central Barrens of Kalimdor in the labyrinthine maze of thorns called Razorfen Downs.