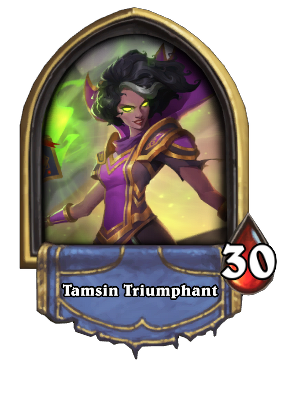 For other representations of Tamsin, see Tamsin Roame (disambiguation).

Tamsin Triumphant is an alternate hero for the

This is one of Tamsin's appearances during the United in Stormwind event.

Tamsin Triumphant is obtained by purchasing the Tavern Pass and reaching level 100 in the United in Stormwind's Rewards Track.

Once unlocked and selected for use, Tamsin Triumphant replaces Gul'dan whenever the player uses a Warlock deck, as well as:

When viewed in the Collection, Tamsin Triumphant has the following flavor text:

There's no better view in Stormwind than from the shoulder of your gigantic dreadlord.
Earnable after purchasing the Tavern Pass.

Most of Tamsin Triumphant's sounds are the same as Scholomance Tamsin. Unique, different ones are noted as Unique in References section.