This article is using {{Card template}}.
See Help:Style guide/Card for how to edit this kind of article.
Edit this article
Tamsin Roame
63218 • BAR_918
Regular 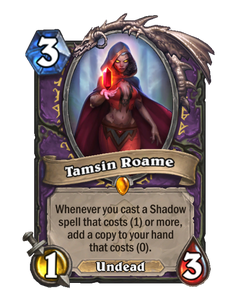 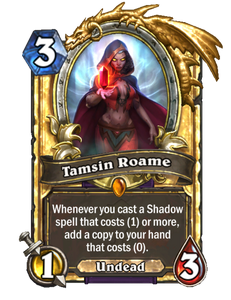 In life, Tamsin Roame was one of the Alliance's most promising mages; now she is the Horde's most dangerous warlock. 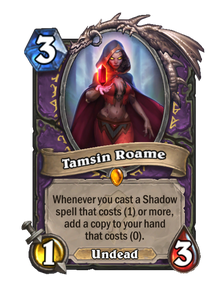 Tamsin Roame is a legendary warlock minion card, from the Forged in the Barrens set.

By duplicating certain Warlock spells, Tamsin lends herself to improving Control Warlock strategies through doubling the mileage from your control options, with Soul Shear, School Spirits, Drain Soul and Siphon Soul among the stronger options for minion removal. However, her weak stats for Cost means that you're unlikely to get more than one turn's worth of value from her.

Tamsin can also be used for combos, generating extra copies of key Shadow spells to kill the opponent in one turn. Tamsin's Phylactery can be combined with Wicked Shipment to grant the entire board two instances of a deadly Deathrattle, especially Humongous Owl, which can be killed off by an effect like School Spirits for massive damage. Likewise, she can add two extra copies of Curse of Agony, dealing 78 damage to the opponent through Agony and putting them deep in Fatigue if they somehow survive.

Tamsin Roame is unique to Hearthstone. She is one of ten mercenaries introduced in Forged in the Barrens.

Like her younger sister Cariel, Tamsin grew up in Stormwind under the tutelage of their father. Whereas her sister was a troublemaker, Tamsin was a superstar mage, the family’s shining star. With a letter of recommendation from Archmage Antonidas, she was accepted to study at Scholomance Academy in Lordaeron, -- only to be cut down during the Scourge invasion.

When The Lich King’s power ebbed and Tamsin’s free will returned, she felt a resentment grow within her. She had lost so much seeking her father’s approval. Her own people had abandoned her in her time of need. In her wrath, she met a kind and supportive benefactor who encouraged her to study the dark arts. She turned to demon summoning.

At her benefactor’s urging, Tamsin has journeyed to the Barrens to seek items of power – power she can use to get her revenge at last...[1]

As seen in Cariel's chapter in Book of Mercenaries, Judicious Junior depicts Tamsin Roame before her death. In Rokara's chapter of Book of Mercenaries, she reveals herself to be said student, as Rokara states how she was one of the best students at Scholomance Academy. She even mentions how she lost her life to The Lich King himself in single combat, and how becoming a Forsaken made her stronger in the long run.

She later heads to Stormwind and summons the dreadlord Anetheron to wreak havoc, killing her father in the process. She duels with Cariel in the cemetary and ultimately loses, causing her to die. After hearing about this, Kazakus and Lady Katrana Prestor apparently ressurects her into a Lich at Alterac Valley.