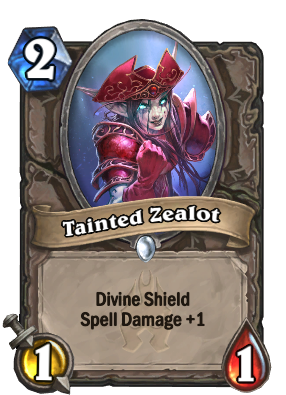 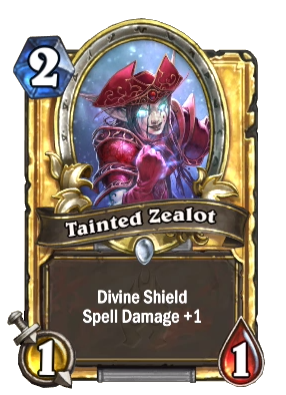 The love she shares seems to go nowhere. Now she's lost her Light, tosses and turns, she can't sleep at night...

Tainted Zealot is a common neutral minion card, from the Knights of the Frozen Throne set.

Tainted Zealot can be obtained through Knights of the Frozen Throne card packs, or through crafting.

Tainted Zealot joins Bloodmage Thalnos and Kobold Geomancer in the 2-mana Spell Damage slot. Because it has Divine Shield, Tainted Zealot must be damaged twice before it dies, as compared to the other 2-drop Spell Damage cards which only need to be hit once. This improves the chances that it survives over several turns, so its effect can be used for longer.

Tainted Zealot can be played with Defile with a 1- or 2-health minion on the board for a devastating board clear dealing at least 5 damage to all minions.

This elf appears to be a member of the Scarlet Crusade or Scarlet Onslaught that has been raised, or perhaps merely corrupted, by the Scourge.

The Scarlet Crusade (or the Scarlet Brotherhood and simply the Crusade) is a religious order, that evolved from Knights of the Silver Hand dedicated to the eradication of the undead from Lordaeron. They are a major adversary of the Forsaken and Scourge, and several quests in Tirisfal Glades involve attacks on Scarlet Crusade troops, leaders, and strongholds. The Scarlet Crusade maintains several bastions throughout the former lands of Lordaeron, namely the Scarlet Monastery, and up until the Shattering - Hearthglen, Tyr's Hand, the fortified Scarlet Bastion of Stratholme, and several smaller camps and scout towers spread throughout the whole area of northern Lordaeron.

Since the fall of the Lich King, the Scarlet Crusade has experienced a downfall, losing many of its holdings in the now-recovering Plaguelands to the Argent Crusade, and many of its surviving members, ironically, to undeath.

Her flavor text is based on the lyrics to the song Tainted Love.