This article is using {{Card template}}.
See Help:Style guide/Card for how to edit this kind of article.
Edit this article
Sword of Justice
643 • EX1_366
Regular 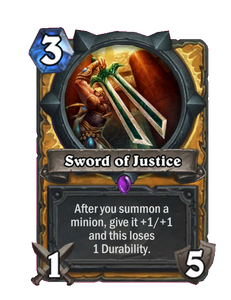 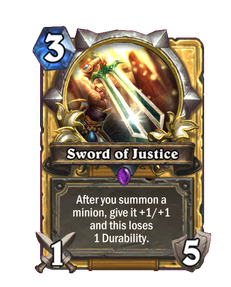 Click here for full resolution image
After you summon a minion, give it +1/+1 and this loses 1 Durability.
Flavor text

I dub you Sir Loin of Beef!

Sword of Justice is an epic paladin weapon card, inducted into the Legacy set, formerly from the Classic set. 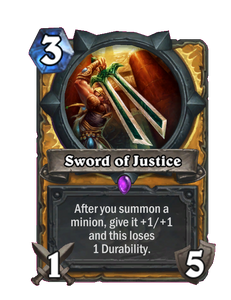 The Sword of Justice has the unique ability of buffing any summoned minions with +1/+1 at the cost of one of point of the weapon's Durability. This weapon synergizes extremely well with the paladin's Reinforce Hero Power and other summoning effects; such as Silver Hand Knight, Imp Master, and Hogger.

It is usually best not to use the weapon to attack with directly, to allow all of the durability to be used for the buffs. The exception is when not attacking with it could result in the loss of a minion of equal or greater value than the buff granted. For instance, it is certainly worth sacrificing +1/+1 to a 4/4 Nightblade in order to kill a Magma Rager, which otherwise would have killed the Nightblade outright, buff and all (assuming the paladin has enough health to take 5 damage without great risk of quick death, of course).

If combined with Muster for Battle, the Sword of Justice will use up 3 charges to buff the Silver Hand Recruits before the Light's Justice created by the ability replaces it. It is inefficient to use Muster for Battle when the Sword has more than 3 charges remaining, even if that means attacking with the Sword to avoid wasting one (since an attack from the Sword of Justice does the same damage as one from the Light's Justice that will replace it).

The Sword of Justice is a two handed sword found in World of Warcraft. The sword required level 80 and featured the same twin bladed look.

This item can be found inside the Tribunal Chest in Halls of Stone on heroic mode.