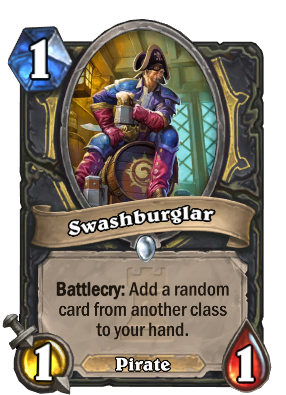 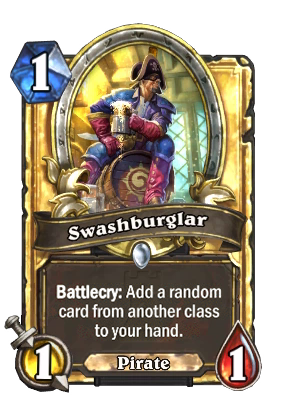 Battlecry: Add a random card from another class to your hand.
Flavor text

Swashburglar is a common rogue minion card, from the One Night in Karazhan set. 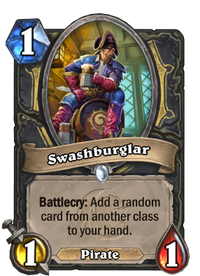 Two copies of regular Swashburglar are obtained by completing The Opera, the second wing of One Night in Karazhan.

As a Wild-format card, both regular and golden versions of Swashburglar can also be crafted for the following amounts:

Two copies of regular Swashburglar (Core) are obtained for raising rogue to level 2.

Two copies of golden Swashburglar (Core) are obtained for winning 50 games as rogue.

Swashburglar (Core) is uncraftable and cannot be crafted or disenchanted.

A great opener that fits in almost any Rogue deck, possessing synergy with many types of cards. It's a cheap Combo activator, it has Pirate synergy, especially great for summoning Patches the Pirate, as well as generating off-class cards to activate cards like Vendetta and Tess Greymane.