This article is using {{Card template}}.
See Help:Style guide/Card for how to edit this kind of article.
Edit this article
Swampqueen Hagatha
52409 • DAL_431
Regular 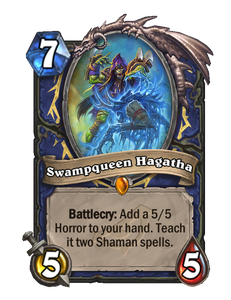 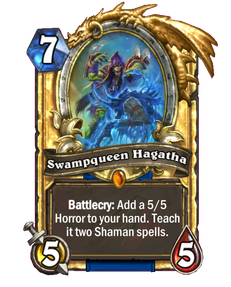 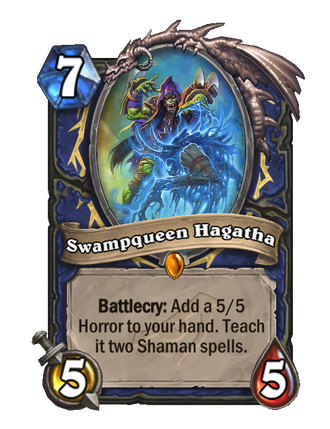 Swampqueen Hagatha is a legendary shaman minion card, from the Rise of Shadows set. 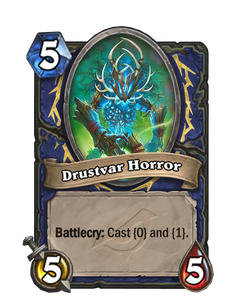 Swampqueen Hagatha trades a low-tempo minion for a very value-efficient minion to use later. The Drustvar Horror can find spells way above its cost like

Rain of Toads, or

The Storm Bringer or help fish for spells like

Hex to gain lethal or save yourself. It is generally well worth the cost and can find its place in control decks or midrange decks as a potential finisher.

Shudderwock, further empowering its Battlecry. Selecting non-targeting spells is advisable and avoid transformation or ally-damaging cards if you plan on using both.

Brann Bronzebeard, allowing for creating two Drustvar Horrors and allowing them to cast twice as many spells. Note that picking a spell with Overload will cause it to be applied twice.

Alternative summon (when the friendly hero is

Alternative summon (when the enemy hero is

For the lore of this card, see Hagatha (Lore).