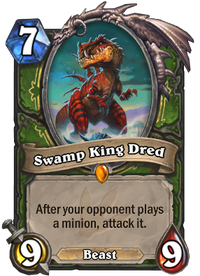 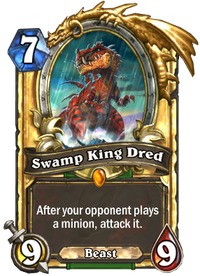 After your opponent plays a minion, attack it.
Flavor text

Swamp King Dred is a legendary hunter minion card, from the Journey to Un'Goro set.

Swamp King Dred can be obtained through Journey to Un'Goro card packs, or through crafting.

These notes pertain to attacks caused by Swamp King Dred's triggered effect which cause it to attack enemy minions played from the hand.

Example: Multiple Swamp King Dreds are in play. Many enemy minions are played. The earliest Dred played attacks and kills the minions each time. Once the earliest one dies, the next earliest Dred becomes the one to attack the new minions, and so on.[2]

Example: Multiple Swamp King Dreds are in play. An enemy minion is played, and the first Dred to attack kills it. The others do not attack.[2]
Example: The opponent plays Lord Jaraxxus. Swamp King Dred triggers, but does not attack, because Jaraxxus has become a hero rather than a minion.[1]

With its immense size (9/9) for mere 7 mana, this minion can be devastating. Its triggered effect activates after the opponent plays a minion, causing Swamp King Dred to immediately attack that minion whatever it was, even if it's Stealthed. This will make it difficult for the opponent to build their board while Dred is in play.

Some caution is warranted when playing this minion however. Dred is particularly vulnerable to Poisonous minions played by your opponent, destroying it for a typically less cost than hard removal. They can also play Deathrattle minions that are normally hard to activate to kill it instantly, such as Devilsaur Egg and Hadronox. When a minion with Divine Shield is played, Dred will attack, removing the shield but leaving the minion alive, which can result in a bad trade.

King Dred is a massive devilsaur and the third boss of Drak'Tharon Keep, a stronghold of the Drakkari ice trolls of Zul'Drak in the frozen continent of Northrend.

From the World of Warcraft Adventure Guide
King Dred is a legend amongst the Drakkari. Stories tell of a troll hunting party locating a mighty beast that thrived in a habitat saturated with Scourge plague. The trolls tamed the devilsaur, believing that he alone held an antidote for the savage disease devastating their people.

How this version of Dred ended up in Un'Goro Crater is unclear.