Survival of the Fittest

Edit
Survival of the Fittest
Regular 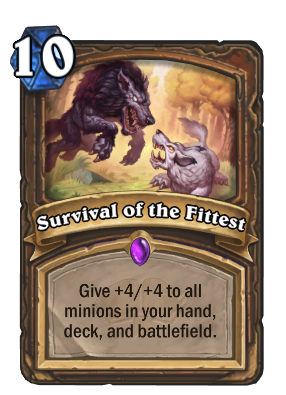 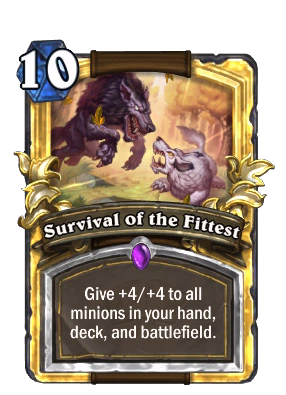 Give +4/+4 to all minions in your hand, deck, and battlefield.
Flavor text

Sometimes the fittest is the one smart enough to not start a fight with seven 6/6 Treants.

Survival of the Fittest is an epic druid spell card, from the Scholomance Academy set.

Even without a field of minions, the effect of this card is significant enough to be a win condition on its own and have a deck built around it - no matter where your minions are, they'll be buffed. Ramp Druid or decks focused on Kael'thas Sunstrider benefit the most from this spell as they're mostly likely to cheat this card out as fast as possible, but even if you don't draw into this card early enough its benefits can't be underestimated. Most Druid decks run minions with high health and letting a single copy of this spell go off can make it impossible for most removal tools to get over them.

Survival of the Fittest pairs incredibly well with Carnival Clown, fulfilling its condition while buffing it to an 8/8 or even 12/12, summoning a board full of colossal minions. It can also be combined with Strongman to summon a free 10/10 with Taunt on the same turn as it is played.