This article is using {{Card template}}.
See Help:Style guide/Card for how to edit this kind of article.
Edit this article
Surrender to Madness
50282 • TRL_500
Regular 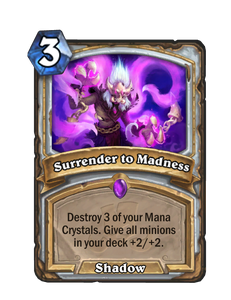 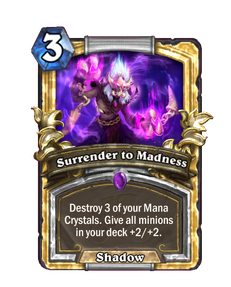 Never give up, always surrender! 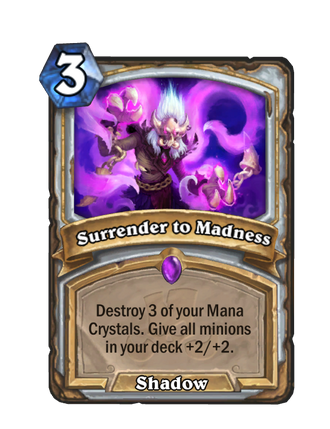 Surrender to Madness is an epic priest spell card, from the Rastakhan's Rumble set.

Surrender to Madness gives an very large benefit on paper, but it pays off extremely slowly. While the +2/+2 buff is intimidating, it's cancelled out by the card leaving you down three Mana Crystals, leading to a massive tempo loss unless you play minions buffed by this card every turn, and even then, a +2/+2 buff equates to roughly 2 mana, effectively leaving you 1 mana behind in tempo. The mana loss also hinders your spells, making even cheap buffs and removal like

Extra Arms much more expensive to play. Furthermore, in Zoo decks where the deck buff shines, spending 3 mana without affecting the board in any way is almost always a suboptimal play, and most other archetypes usually cannot justify putting yourself behind by 3 mana, making Surrender to Madness a risky niche card at best.

Surrender to Madness can be used with

Mojomaster Zihi to put both players on an even field of five mana total while receiving the benefits of bonus stats. However, as Surrender to Madness is suited more to an aggressive zoo playstyle, this is not necessarily recommended as the mana reset will almost always come too late to significantly change the game's outcome.

Spirit of the Dead. After the latter shuffles numerous 1-cost copies into your deck, play this card with 10 mana and then play Bwonsamdi to draw multiple buffed minions ready to play next turn for a large tempo swing.

Surrender to Madness is a level 100 talent for Shadow priests in World of Warcraft. It grants a powerful temporary buff to the priest player, allowing them to cast while moving and causing all of their Insanity-generating abilities to generate 100% more Insanity until they exit

Voidform, but extols a heavy price from the user: as soon as Voidform expires, the priest dies "horribly".