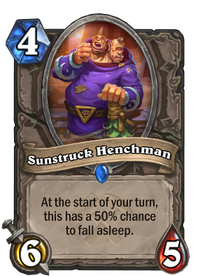 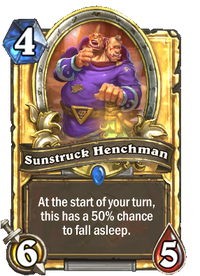 At the start of your turn, this has a 50% chance to fall asleep.

There is E.V.I.L. here that DOES sleep.

Sunstruck Henchman is a rare neutral minion card, from the Saviors of Uldum set.

Sunstruck Henchman can be obtained through Saviors of Uldum card packs, or through crafting.

While the stats on Sunstruck Henchman are good, the effect is absolutely crippling when it triggers. This makes it highly undesirable for Constructed play, which normally wants as much consistency as possible.

If you do play a Sunstruck Henchman on turn four, your opponent may be forced to kill it off. A 6/5 is threatening enough to demand answer, so they may not want to gamble on the 50/50.