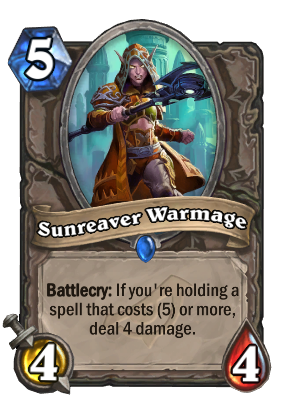 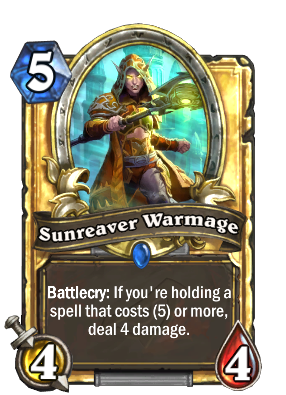 Battlecry: If you're holding a spell that costs (5) or more, deal 4 damage.
Flavor text

Sunreaver Warmage is a rare neutral minion card, from the Rise of Shadows set.

Sunreaver Warmage can be obtained through Rise of Shadows card packs, or through crafting.

While holding a spell that costs 5 or more in your hand, this outclasses almost every other 5 cost minion in the game in terms of Tempo. Compared with Baited Arrow, an already good card, you lose -1/-1 for 2 more direct damage that can be sent anywhere instead of a minion to kill. It is best to run at least 4 or more spells that cost 5 or more in your deck to get this Battlecry triggered consistently. Running any lower can mean that you won't be able to fufill the conditions for the Battlecry in most games.

The Sunreavers are a faction of blood elves who represented the Horde in Dalaran. Named for their leader, Archmage Aethas Sunreaver, the Sunreavers sought to have their people readmitted as members of the Kirin Tor, a plight they were successful in. They also joined the Horde Expedition in Northrend. The Sunreavers were eventually expelled from the Kirin Tor some time after Jaina Proudmoore came into power, and those remaining returned to Quel'Thalas. The Alliance equivalent of the Sunreavers is the Silver Covenant.