This article is using {{Card template}}.
See Help:Style guide/Card for how to edit this kind of article.
Edit this article
Summoning Stone
2958 • LOE_086
Regular 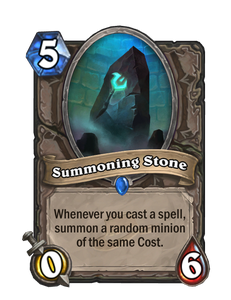 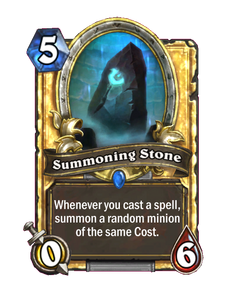 Dimensions: Full • 330 x 410px
Whenever you cast a spell, summon a random minion of the same Cost.
Flavor text

Sometimes it feels like it's always the same slackers that are waiting for a summon. 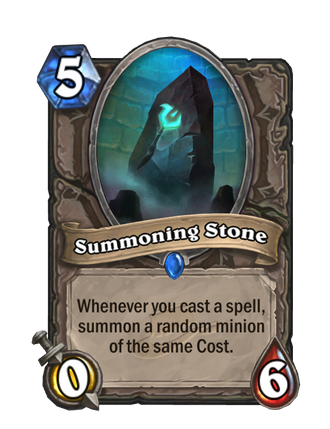 Summoning Stone is a rare neutral minion card, from the League of Explorers set.

Example: If a player uses

Frostbolt with a Summoning Stone on the board, they will summon a random 7-Cost minion.[1]
Example: Playing spells following an opponent's

Example: Suppose you have Summoning Stone in play,

Atiesh equipped, and a

Shadowflame in hand with mana cost reduced to 1 by

Emperor Thaurissan. If you play

Cho'gall and use its effect to play the Shadowflame for 1 Health, you will spend no mana but both Summoning Stone and Atiesh will summon a 1-Cost minion.[2]

Conceal as the spell protects the minion for a turn while giving you a 1 drop to use. Next turn you'll have 7 (or more) mana to benefit from Summoning Stone's effect.

Alternatively, any Mage deck can benefit from this card by playing it on turn 8 and immediately following it with

Frost Nova to freeze the enemy board. Though the opponent might be able to remove the Summoning Stone with spells or Charge minions, usually they will not have the cards for this and you can flood the board while casting spells on the next turn.

In World of Warcraft Summoning Stones (also known as Meeting Stones) are placed outside dungeons and raids to let adventurers (players) summon their friends to the instance, in order to do battle there together. It takes 2 people to summon others with a Summoning Stone.

Prior to the advent of the Dungeon Finder system, Summoning Stones were instrumental in allowing players to form groups to tackle instanced content. Players could communicate globally in the /LFG channel, but travelling to the instance in question could take a long time, especially if the player was on another continent. Usually the two closest players would travel to the instance, where they would channel the Summoning Stone's effect to teleport the other group members to the location one by one.

Because of this functionality, and due especially to the long delays that were often involved in finding a full group, and waiting for invitees to sell junk, repair armor, purchase supplies and otherwise prepare to be summoned, players would often spend quite a while waiting around or near Summoning Stones. As such, they were often hotspots for world PvP. When players from one faction approached a Stone to summon their allies, they would often find players of the other faction already there, and fighting would ensue. This was exacerbated by the fact that the Stones are usually placed close to the entrance to the instance, meaning players leaving the instance would also travel past the Stone on their way back out, leading to even greater traffic and thus greater potential for conflict.