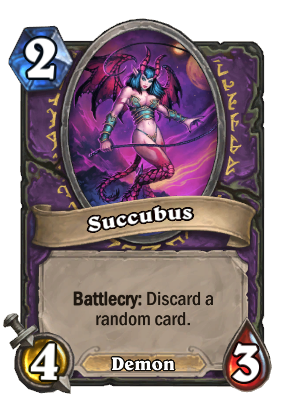 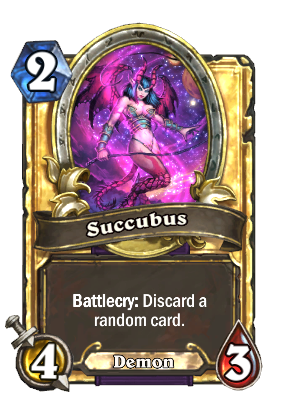 Warlocks have it pretty good.

Succubus was a warlock minion card, formerly from the Basic set. It was removed in Patch 14.6.0.31761 and replaced with Felstalker.

The Succubus is the third minion that becomes available to warlock players in World of Warcraft. A light-damage minion, she is primarily used for crowd control through her Seduction ability. She can also knock enemies back with Whiplash, and evade early detection with her Lesser Invisibility.

The sayaad (pronounced say-ahd) (or sayaadi) are a species of demons, who look similar to the nathrezim. Only female sayaad are commonly seen, and are known as succubi (singular succubus). The males are named incubi (singular incubus).

Succubi revel in causing anguish, and serve the Burning Legion by conducting nightmarish interrogations. Creatures of incredible mental powers, they can lull those of weak minds into their servitude. Succubi know much about love and slake their lust with coupling. They are described as devourers of souls, destroyers of hearts, dominators of minds, and tempters of men.

The cruel sayaadi temptresses exemplify the subtler side of the Legion's nihilistic crusade. They revel in causing anguish and pain, and their murderous interrogations are the stuff of nightmares. Succubi have a tendency to keep detailed logs of their day-to-day activities. Their accounts are often lurid, almost always grotesque, and were typically written onto "paper" made from the skin of an enemy or a captive.