This article is using {{Card template}}.
See Help:Style guide/Card for how to edit this kind of article.
Edit this article
Subject 9
49447 • BOT_573
Regular 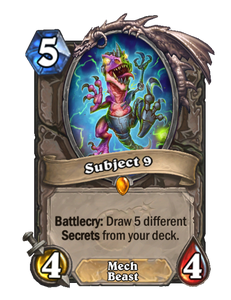 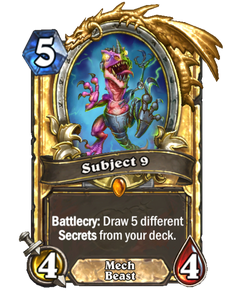 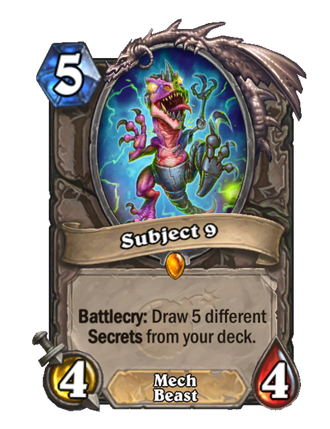 Subject 9 is a legendary neutral minion card, from The Boomsday Project set.

This card grants an obscene amount of card draw, provided your deck is full of multiple Secrets to draw.

Subject 9 is best used in Secret Hunter decks, due to their abundance of different Secrets, multiple Secret synergies, and greatly supplements the class's general lack of card draw. Various hunter cards such as

Houndmaster can also synergize with this card due to it being a Beast minion type. It's less useful on Mage since playing them is a significant mana investment and they lack Secret synergy effects that benefit from playing multiple of them in quick succession, at least in Standard format. The other two classes with Secrets, Paladin and Rogue, benefit the least because Paladin Secrets aren't too beneficial when directly played and Rogue Secrets are only a handful and situational.

Subject Nine is a level 15 quest giver located at the Secret Lab in Azshara. She is a sentient raptor attempting to engineer an escape.

She also appears (as a hatchling) at KTC Headquarters on Kezan during the goblin starting experience, where

Hobart Grapplehammer reveals that he was responsible for her sentience - among other things.

Imported from the Barrens, this female raptor was made intelligent by Hobart Grapplehammer. On Kezan she was still a hatchling.

She was bred with Subject Four in order to create a unique race of cognitively superior raptors. She plans to leave Azeroth with her children and colonize a new world.

In Hearthstone lore, Subject Nine joined Boom Labs after departing from Azshara.[1] After arriving, she received several new robotic body parts. While she had some help from characters with opposable thumbs, and Dr. Boom provided some unhelpful advice, in truth she was the genius behind her own "evolution".[2]