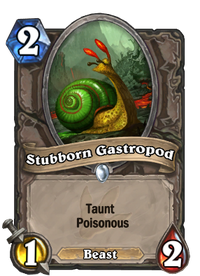 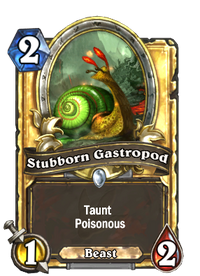 Stubborn Gastropod is a neutral common minion card, from the Journey to Un'Goro set.

Stubborn Gastropod can be obtained through Journey to Un'Goro card packs, or through crafting.

This minion is a powerful and annoying Taunt. As this has worse stats than Frostwolf Grunt, its main use is destroying a single high-value minion of your opponent. Taunt is less useful than Stealth for guaranteeing an attack, but it may force your opponent to not attack with their minions, or even waste a removal spell to clear the Gastropod. Playing this on an empty board can cause your opponent to be hesitant to play large or valuable minions until they are able to adequately clear or sacrifice a minion into it.

Priests can make especially good use of this minion. Since its attacks can kill any minion, keeping it alive with health-boosts like Power Word: Shield and Kabal Talonpriest usually pays off, as its attacks will stay relevant despite causing only one point of damage. If you see a priest using this minion, kill it before it gets too tough or keep a silence ready. Otherwise, this snail may just devour your entire board presence.

If your opponent has a Swamp King Dred on the board, this minion will be its end, because Dred will attack the Gastropod, which results in both minions' death.

When playing against a priest, beware of the possibility of mind control effects like Potion of Madness or Cabal Shadow Priest, which can be used to destroy both the Gastropod and one of your other minions.

This card is possibly based on the infamous Gastropod mobs from Throne of Thunder.

Gastropods are level 92 snail trash mobs in the Throne of Thunder between Megaera and Ji-Kun.

For trash mobs, they are unusually deadly. They cannot be tanked and will instead fixate on random players. Any players caught in front of a moving Gastropod in melee range will be instantly killed. The proper way to kill a Gastropod is to stay out of melee range, taking advantage of its large hitbox.

These mobs have been nicknamed "LFR destroyers" thanks to the sheer number of player deaths they tend to leave behind on Raid Finder difficulty, as LFR players, especially new ones doing Throne of Thunder for the first time, are used to mindlessly mowing down trash mobs and tend to get caught unprepared by the one-shot kills.