This article is using {{Card template}}.
See Help:Style guide/Card for how to edit this kind of article.
Edit this article
Strongshell Scavenger
43022 • ICC_807
Regular 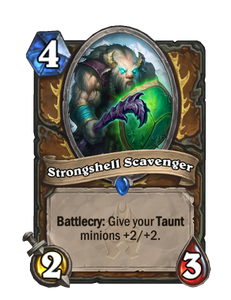 It isn't "grave robbing" when there's no grave. It's just scavenging… 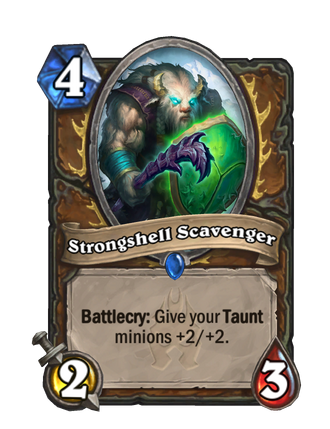 Strongshell Scavenger is a rare druid minion card, from the Knights of the Frozen Throne set. 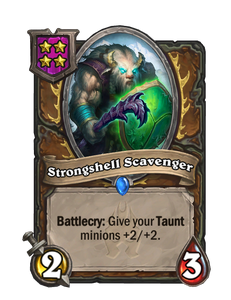 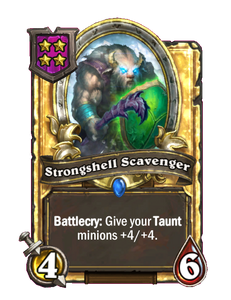 This card is strong for Taunt Druids who like to use a lot of weaker taunt minions. Relatively weak taunters like

Druid of the Swarm and

Stonehill Defender gain a stronger defensive presence when backed by Strongshell Scavenger's battlecry. When paired with

Hadronox's deathrattle, a wall of defensive minions can gain some potent and much needed offense.

Spreading Plague. While expensive to play on the same turn, this combination can potentially allow you to retake the board if outnumbered by a lot of weaker enemy minions, who now have to face a wall of 3/7 Scarab Beetles.

The Strongshell Scavenger appears to be a taunka who is attempting to scavenge turtle shells to use as a shield.

The taunka (also known as winter tauren), are an ancient offshoot of the yaungol and relatives to the tauren who have adapted to the harsh environment in Northrend. Unlike their more peaceful tauren relatives, the taunka forcibly bend nature and the elements to their will in order to survive.

Garrosh Hellscream and his orc forces upon their arrival in Northrend. Due to being forced to migrate from their homes by the encroaching Scourge, the taunka have largely given their allegiance to the Horde.

Although they appear similar to the tauren, they resemble bison more than cattle, and are referred to as bison-men by Apothecary Malthus.