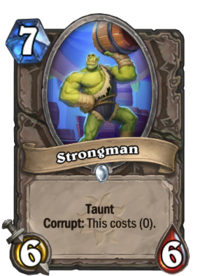 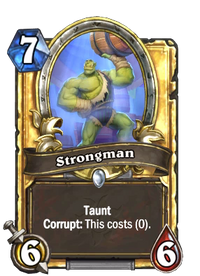 Sure, it looks impressive until you realize it's a barrel of helium.

Strongman is a common neutral minion card, from the Madness at the Darkmoon Faire set.

Strongman can be obtained through Madness at the Darkmoon Faire card packs, through crafting, or as an Arena reward. 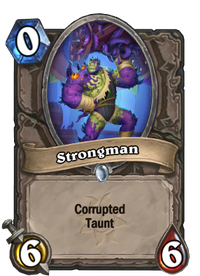 Best used with expensive board clears as a way to stabilize. Twisting Nether, Tidal Wave, Plague of Death, and The Amazing Reno are some examples.

If you're facing off against a control deck, it might be a good idea to spread your Strongmen out. Otherwise both may be caught in a counter-clear.

In a pinch, an uncorrupted Strongman is an okay card, although obviously not great. Its high cost can be used to Corrupt other cards like Fleethoof Pearltusk and Tickatus, which are more impactful when recalled by Y'Shaarj, the Defiler.