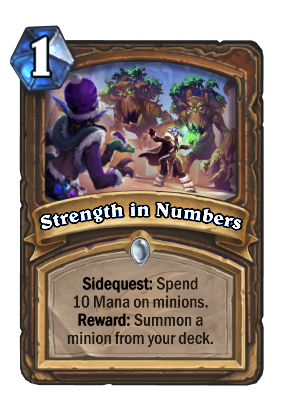 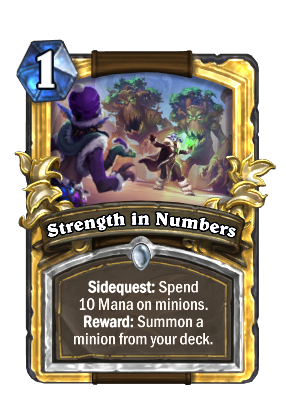 Strength in Numbers is a common druid spell card, from the Descent of Dragons set.

Strength in Numbers can be obtained through Descent of Dragons card packs, or through crafting.

Strength in Numbers is best put into a deck using multiple large minions, particularly a Ramp Druid. While you won't be playing minions early, the quest will activate on a turn where you've played a large minions, putting a colossal amount of stats onto the board. Some good minions to consider are Emerald Explorer, Winged Guardian, and Evasive Drakonid.

Other good minions to pull are strong cards with negative Battlecries, like Injured Tol'vir or Witchwood Grizzly.

Strength in Numbers also has synergy with Embiggen and Survival of the Fittest, raising both the mana cost and stats of minions. This allows you to cheat out, not only large defensive minions, but also powerful offensive threats like Evasive Wyrm and Leeroy Jenkins.

This card appears to be showing Commander Elise summoning some embiggened treants to fight Madame Lazul.