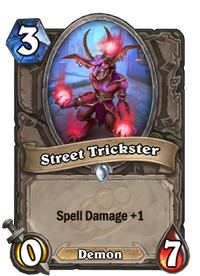 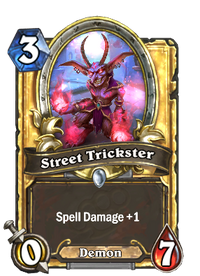 Street Trickster is a common neutral minion card, from the Mean Streets of Gadgetzan set.

Street Trickster can be obtained through Mean Streets of Gadgetzan card packs, or through crafting.

Street Trickster has a very large health pool for a 3 cost minion. However, its complete lack of attack is a large weakness, as your opponent can often trade into it with two minions at no harm to them. Street Trickster is most useful if you can immediately follow up with a spell to benefit from the spell damage, much like Evolved Kobold.

Street Trickster is an imp aligned with the Kabal.