This article is using {{Card template}}.
See Help:Style guide/Card for how to edit this kind of article.
Edit this article
Stranglethorn Tiger
68 • EX1_028
Regular 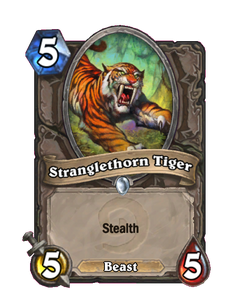 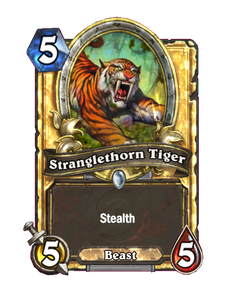 Stranglethorn Tiger is a common neutral minion card, inducted into the Legacy set, formerly from the Classic set. 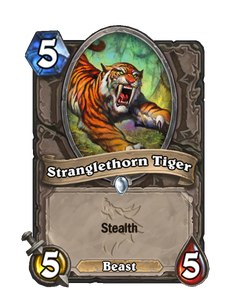 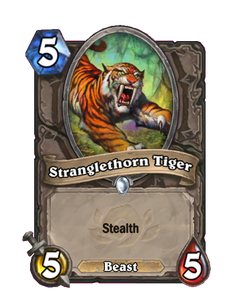 Two copies of regular Stranglethorn Tiger (Core) are obtained for raising sum of all your class levels to 1.

Two copies of golden Stranglethorn Tiger (Core) are obtained for winning 500 games across all classes.

Stranglethorn Tiger (Core) is uncraftable and cannot be crafted or disenchanted.

Stranglethorn Tiger can be used in hunter or druid decks to take advantage of Beast synergy. The combination of Stealth and high health give the Tiger good chances to survive until your next turn to take advantage of combo pieces, like Houndmaster or Druid of the Fang, or the all-popular Kill Command. Its 5 health also allows it to survive Snipe.

Buffing a stealthed minion can provide a large advantage for the player since it can only be targeted by AoE or randomly directed damage effects.