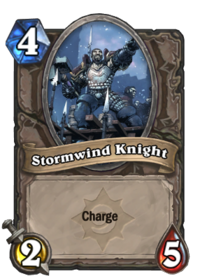 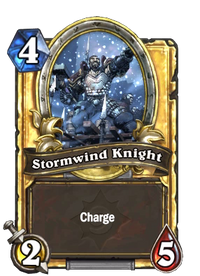 They're still embarrassed about "The Deathwing Incident".

Stormwind Knight is a neutral minion card, inducted into the Legacy set, formerly from the Basic set. 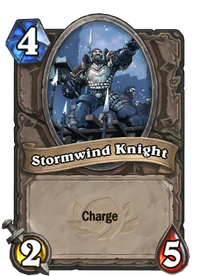 Two copies of regular and golden Stormwind Knight are automatically given after the player completes the Ranked's New player experience system, unlocking Wild and Classic format.

Due to its unusually large health pool and Charge capability, Stormwind Knight is especially suited for clearing low health opposing minions and surviving.

Summon
For the King!

Stormwind City, located north of Elwynn Forest on Azeroth's northwest coast, is the capital city of the kingdom known as Stormwind and the largest human city of Azeroth. However the city-state also controls or influences other territories, which include Elwynn Forest, Northshire Valley, the Redridge Mountains, Westfall and Duskwood. After the Third War, it has become one of the last great human cities.

No city better demonstrates human determination than Stormwind. Destroyed during the Horde’s initial invasion of Azeroth, Stormwind was painstakingly reconstructed by the Stonemasons’ Guild after the Second War. Parts of the city were razed again when Deathwing, the corrupted black Dragon Aspect, brutally attacked Stormwind, but the other undamaged districts are more beautiful than ever thanks to their hardworking inhabitants. From the magnificent Cathedral of Light, which serves as a major spiritual hub, to the awe-inspiring Valley of Heroes, which commemorates the sacrifices of Stormwind’s loyal champions, the city truly represents the courageous heart of humanity.