This article is using {{Card template}}.
See Help:Style guide/Card for how to edit this kind of article.
Edit this article
Stormwind Champion
753 • CS2_222
Regular 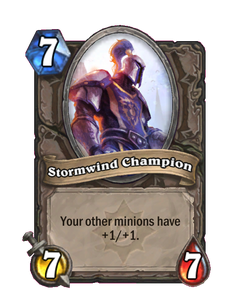 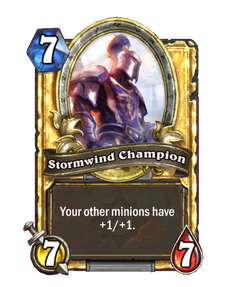 Click here for full resolution image
Your other minions have +1/+1.
Flavor text

When Deathwing assaulted the capital, this soldier was the only member of his squad to survive. Now he's all bitter and stuff.

Stormwind Champion is a neutral minion card, inducted into the Legacy set, formerly from the Basic set. 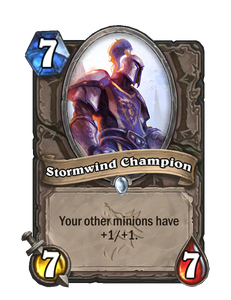 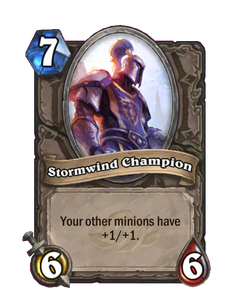 Regular and golden Stormwind Champion are uncraftable and cannot be crafted or disenchanted.

Two copies of regular Stormwind Champion (Core) are obtained for raising sum of all your class levels to 1.

Two copies of golden Stormwind Champion (Core) are obtained for winning 500 games across all classes.

Stormwind Champion (Core) is uncraftable and cannot be crafted or disenchanted.

Stormwind Champion is also expensive and only useful late game. If you aren't running a deck that focuses on flooding the board with minions, the chances of seeing his full potential are minor. He works best with decks that drop a large number of minions that bring additional minions with them. Protecting your board will be key for this card to be worth considering. The bonus is fine, but not if you have a board wipe on turn 6. Having two come out back to back can be devastating.

Stormwind City is located north of Elwynn Forest on Azeroth's northwest coast nearly 1000 years ago, and is the capital city of the kingdom known as Stormwind and the largest human city of Azeroth. However the city-state also controls or influences other territories, which include Elwynn Forest, Northshire Valley, the Redridge Mountains, Westfall, and Duskwood. After the Third War, it has become one of the last great human cities.

No city better demonstrates human determination than Stormwind. Destroyed during the Horde’s initial invasion of Azeroth, Stormwind was painstakingly reconstructed by the Stonemasons’ Guild after the Second War. Parts of the city were razed again when Deathwing, the corrupted black Dragon Aspect, brutally attacked Stormwind, but the other undamaged districts are more beautiful than ever thanks to their hardworking inhabitants. From the magnificent Cathedral of Light, which serves as a major spiritual hub, to the awe-inspiring Valley of Heroes, which commemorates the sacrifices of Stormwind’s loyal champions, the city truly represents the courageous heart of humanity.