This article is using {{Card template}}.
See Help:Style guide/Card for how to edit this kind of article.
Edit this article
Stormpike Commando
413 • CS2_150
Regular 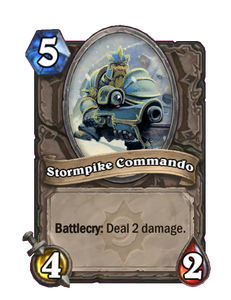 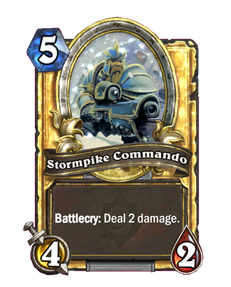 The Stormpike Commandos are demolition experts. They also bake a mean cupcake. 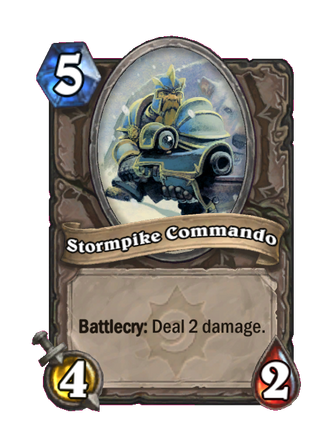 Stormpike Commando is a neutral minion card, inducted into the Legacy set, formerly from the Basic set. 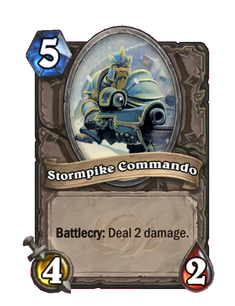 Regular and golden Stormpike Commando are uncraftable and cannot be crafted or disenchanted.

Stormpike Commando's stats are very poor for his cost, and as a 4/2, he may die before you are able to attack with him. His main strength is in his Battlecry, which can be used to destroy a minion, or damage one before finishing it off.

Knife Juggler which it is imperative to remove. His Battlecry allows him to serve as a form of direct removal, particularly useful for classes which lack many removal options. However, if used simply for the Battlecry effect,

Disciple of C'Thun is a similar option for only 3 mana, with the added benefit of boosting

C'Thun should he be included in the deck.

Burrowing Scorpid, by costing 1 less mana, has 1 more attack, has beast synergies, and can gain stealth if the Battlecry kills its target.

The Commando's low Health makes it advisable to play him on an empty board, giving him a better chance of surviving the turn. His Battlecry can be useful for clearing enemy minions, preventing easy trades. While generally considered a poor card, with the right board the Commando can remove one minion with his Battlecry and force the opponent to trade another to remove him, at the least providing a 2 for 1 card advantage.

The Stormpike clan is a respected dwarven clan, and are well known for their fine and discerning tastes. They are apparently rich dwarves as well.

The Stormpike Guard (aka Stormpike Expedition) is the Alliance faction in the Alterac Valley battleground. They are an expedition of dwarves of the Stormpike clan in search of artifacts. The Stormpikes' search for relics of their past, and harvesting of resources in Alterac Valley have led to open war with the orcs of the Frostwolf clan who are dwelling in the southern part of the valley. They were also issued with a "sovereign imperialistic imperative" by King

Magni Bronzebeard to take the valleys of Alterac for Ironforge. The dwarfs have allied with the Bloodfang Worgen in Hillsbrad in order to combat the Forsaken.

The main Stormpike base is Dun Baldar where their leader, Vanndar Stormpike, resides with his marshals. His second in command, Captain Balinda Stonehearth, is found south of Dun Baldar at Stonehearth Outpost.