"Lay siege to Stormwind! The city starts with 1 Health and goes up as you hit it. How much damage can YOU do?"

Storming Stormwind is a Tavern Brawl. It debuted on August 3, 2016.

This is the first single-player Tavern Brawl.[1]

This first ever single-player Brawl sees players competing with constructed decks of any class against the computer-controlled hero City of Stormwind.

The City of Stormwind starts the game with the Armory weapon equipped, and from turn 2 onward the weapon's Attack is increased by 1 at the start of each turn. If it is destroyed, the weapon will replace itself at the end of the City's turn; the replacement weapon will have its Attack reset to 0, but will gain in Attack more rapidly until it catches up to the value it would have had that turn if it had not been destroyed. Armory is never used by the enemy hero to attack, but grants its Attack value in stats to Swordsman and Shieldsman, leading to ever more powerful minions being summoned as the match progresses. The City of Stormwind's Hero Power Barracks is auto-cast, meaning it is used at the start of any turn where the hero has at least 2 mana, immediately after Armory gains Attack. 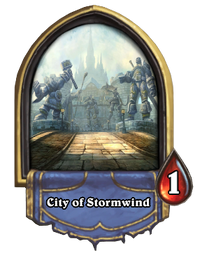 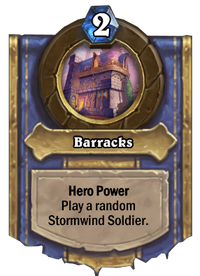 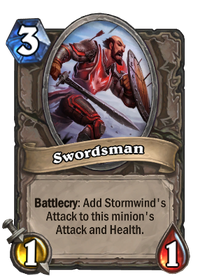 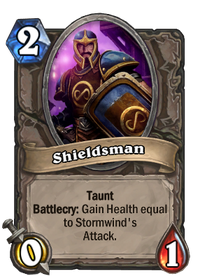 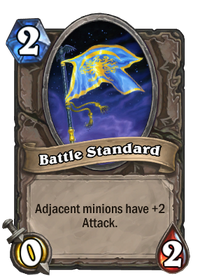 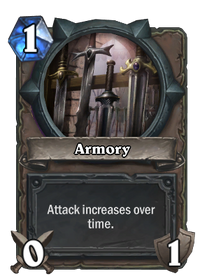 The City of Stormwind uses a 40-card deck for the encounter, augmented by the minions summoned by Barracks, mostly composed of mage and paladin cards. Its deck notably includes some uncollectible cards, such as Armor Plating. The below table lists the maximum number of times each card has been seen within a single match, but given the size of the deck is likely missing many duplicate copies.

Winning is technically possible with any strategy since taking lethal damage at any time, even the first turn, will lead to a win screen. Therefore many players instead set personal goals of achieving high levels of damage before dying. In order to reach 1000 damage, for instance, the player will need to build a deck that works well against the City of Stormwind.

Because the special minions Swordsman and Shieldsman gain synergy from the City of Stormwind's weapon Armory, and the weapon increases in Attack each turn, destroying the opponent's weapon regularly is vital to prevent huge minions from quickly overwhelming your board. Cards that can accomplish this are Acidic Swamp Ooze, Harrison Jones, and Bloodsail Corsair (since the Armory's has only 1 Durability), along with Sabotage for rogues. Blingtron 3000 can also serve this role by forcing the City of Stormwind to equip a new weapon. However, while the City will not attack using the weapon, its Attack value will function for minions summoned by Barracks, making this a risky move. Any weapon will be replaced as usual at the end of the turn with a fresh Armory.

Effects that heal the opponent, such as Zombie Chow and Tree of Life, can be used in this Brawl without drawback.

Kel'Thuzad can be very effective in this Brawl.

Stormwind is the capital city of the Alliance, and home of the humans. Just to the north of the lush green lands of Elwynn Forest in the Eastern Kingdoms, the city has a long and troubled history. One of the last great human cities left on Azeroth, Stormwind was destroyed by the orcish invasion during the First War, but was painstakingly rebuilt following the Second War. A sprawling city criss-crossed with canals, Stormwind is split into several smaller districts, including the Cathedral of Light and the base of operations for SI:7. The capital is home to the humans of Azeroth, and the seat of Varian Wrynn, King of the Alliance, and his son, Anduin Wrynn, as well as Genn Greymane of the worgen.

Stormwind features in Hearthstone as a battlefield.