This article is using {{Card template}}.
See Help:Style guide/Card for how to edit this kind of article.
Edit this article
Stormforged Axe
960 • EX1_247
Regular 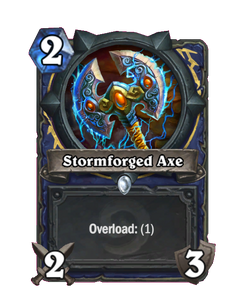 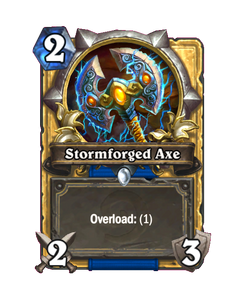 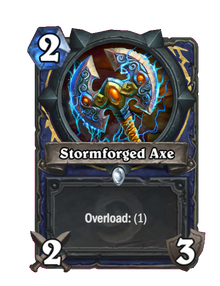 Stormforged Axe is a common shaman weapon card, inducted into the Legacy set, formerly from the Classic set. 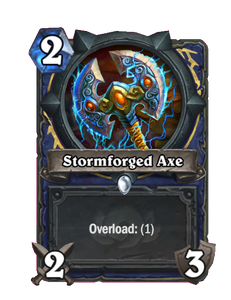 The Stormforged Axe is a card that must be used correctly or it could hurt in the long run. The card shouldn't be played near the beginning of the game despite the 2 mana cost. The Overload of 1 is a setback you generally should not take by using this card on Turn 2 (or Turn 1 if The Coin in used). Later in the game larger mana pools will make the card's overload less significant. However, in the absence of other options, it can be useful for early small minion removal.

Best used in combination with Overload-synergy such as Tunnel Trogg or Unbound Elemental for extra benefits, or with Lava Shock or Eternal Sentinel to reduce its cost. A good early game combo with Tunnel Trogg, allowing the shaman to remove the opponent's minions while buffing the Trogg for face damage.