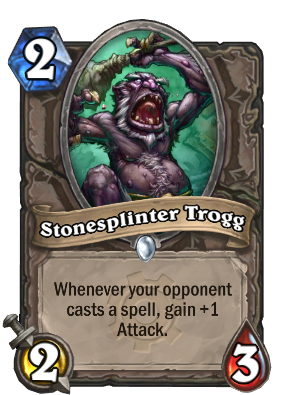 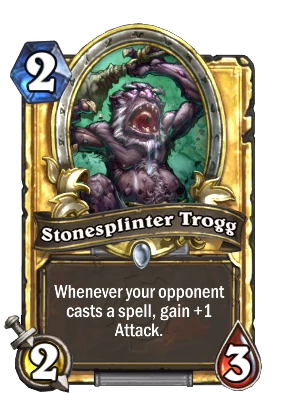 Whenever your opponent casts a spell, gain +1 Attack.
Flavor text

The only thing worse than smelling troggs is listening to their poetry.

Stonesplinter Trogg is a common neutral minion card, from the Goblins vs Gnomes set.

Stonesplinter Trogg can be obtained through Goblins vs Gnomes card packs, or through crafting.

With 3 Health, the Trogg can survive most AoE spells. It is best when you have another, stronger minion that is likely to be hit with a single-target spell, since the Trogg will die to most of them.

The troggs are the variation of humanoid created by the Curse of Flesh from the first type of Earthen created by the Titans. They retain the strength of the Earthen, but suffer from vastly reduced cognitive abilities.