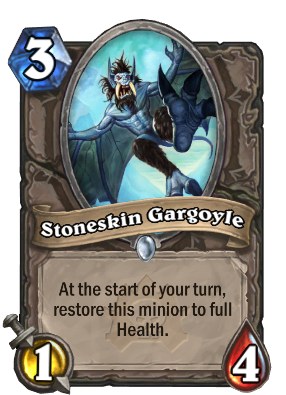 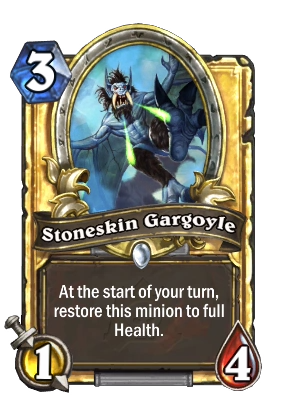 At the start of your turn, restore this minion to full Health.
Flavor text

Stoneskin Gargoyle is a common neutral minion card, from the Naxxramas set.

Two copies of regular Stoneskin Gargoyle are obtained by defeating Noth the Plaguebringer in Curse of Naxxramas's Plague Quarter.

As a Wild-format card, both regular and golden versions of Stoneskin Gargoyle can also be crafted for the following amounts:

Due to its Health-regenerating ability, the Gargoyle can be a very effective Taunt. Cards like Mark of the Wild can be used to grant it Taunt and increase its Health, allowing it to regularly trade against other minions without being destroyed in the process.

Note that the Gargoyle only restores its Health at the start of the controlling player's turn, not each turn. This means that if the Gargoyle is damaged during the controlling player's turn, the opponent will have a full turn to attempt to remove it before it can regenerate. This can discourage using the Gargoyle to directly attack other minions during your turn, since this will strongly increase the likelihood of it being removed by the opponent that turn.

Stoneskin Gargoyles are undead gargoyle mobs found in the Plague Quarter of Naxxramas.

The dreaded gargoyles of Northrend are voracious flying creatures who revel in slaughter and mayhem.

Brought from the frozen north by the armies of the Lich King, these strange, wiry flyers have rough, crystalline hides which protect them from all manner of attacks. Gargoyles make effective scouts and can be deadly if left to rain attacks from the air, but they have a very obvious weakness. Most of them have to go through long periods resting as stone to maintain the energy they need to carry their heavy bodies through the air. In times of great peril, gargoyles also land and condense their crystalline hides into the stone-like surface to make themselves nearly impervious to any forms of attacks. Though they are unable to attack in this state, they can take time to regenerate their wounds and replenish their energies. The grotesque is a smaller gargoyle that is used to divert the flow of rainwater on Scourge buildings to prevent mausoleum flooding.

Gargoyles were brought to Lordaeron by Arthas for the siege of Silvermoon. Now, gargoyles live in the Eastern Plaguelands and the Ghostlands. There are also some gargoyles affiliated with the Twilight's Hammer and the Old Gods. It is unknown if these are related to the Scourge gargoyles or if they have been created by the Old Gods.

Stoneskin Gargoyle's original design was that of a 1 Mana 1/2 Beast.[3]